Portia likes the fresh air. She is often at the door leading to the concrete ditch. When Hector first came, Po was forced to find a new place in which to relax, as the library was, for the time being, out of bounds to her. She settled on the cat-tree in the sitting room by the sliding door. It turned out that she rather liked her decision, especially when the glass was opened to the screen door, and she could smell the outside.

Now, she has a habit. After each meal, she waits for me to open the glass door to the screen. Her eagerness is such that she will trot beside or in front of me to the door, anticipating its opening. Sometimes, she will croak a reprimand about my speed being insufficient.

This is Portia’s constitutional. Being unable, and probably unwilling, to go outside for a walk (however much good that would do her figure), she nonetheless enjoys how the outside comes to her. What I am going to do when the winter comes, I don’t know. The air is already chilly at night; this evening, there is a stiff wind, which is lowering the temperature further. Po doesn’t spend all night at the door, but long enough for the Cosy Apartment to lose some of its cosiness as the air inside cools to equal the air outside.

But that’s in the future, albeit the near future. For now, my round girl will take the air, smelling what the world brings her. And I will put on a sweater. 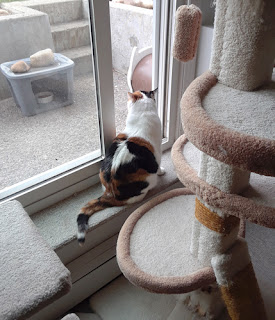 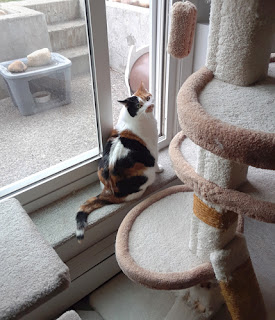