The Yuletide has come again. Each year, I hope that Christmas will herald something better; it is the promise of something better that is the essence of Christmas, and perhaps that improvement is not always meant to happen right away. Sometimes we must be patient, and await our Christmas gift.

This year, I lost another two cats, two of my originals. Josie died in February, and Tucker earlier this month. Josie had her final Christmas with me, though I did not know it was her final one at the time. Even so, it was not a matter of hoping that she would hold on for one last holiday. I miss my old lady, but I was aware long ago that this would not be her Christmas.

I thought Tucker might make it to this far. I guessed that, if he did, it would be his last. But I hoped he would see one final Yuletide with me. As it turned out, he did. It just wasn’t this one.

Below is my Christmas card for 2021, inside and out. (You can enlarge the image by clicking on it.) I have included my roly poly. He deserved to be on this card; he survived so much that he has earned it.

I am off for four days this weekend, as I was last year. The usual chores require completion, but I will also relax, read books, listen to music and, of course, spend time with my three boys. 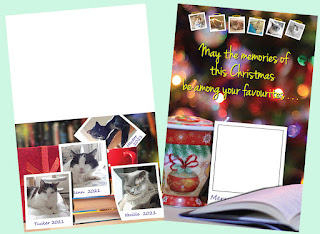