It’s coming up on a year that Tucker has been with me. He is a foster-cat; I’m taking care of him on behalf of the Lethbridge PAW Society. He arrived just a few hours after my previous foster-cat, Devon, was picked up by his new people and taken to his permanent home. Devon, by the way, is doing fine. He has been accepted (at last) by the two cats already in the household and has since been joined by a fourth cat, who has become his best friend. 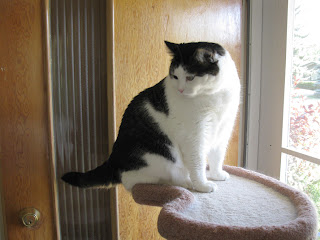 Tucker was declared unwanted by his family after he wet out of the litter-box several times. The household was going through a bit of an upheaval - a happy one, mind, you: a new baby had arrived - and Tucker’s nerves were on edge. So he was ‘returned’ to the PAW Society and I volunteered to give him a place to live until he was adopted by some lucky person or persons. So far, he has not been chosen. That surprises me; he is an adorable, sausage-shaped cat with a wonderful personality. But his prolonged stay doesn’t bother me, as I find him a delightful companion, however temporary.
Tucker remains a timid animal. He is forever coming over to me and rubbing against my leg, showing me that he likes me. That’s appreciated (after all, how often do people, even close friends, do that?) but just as often, he comes toward me, then changes his mind, due to movement on my part or a sound or something only he can perceive. It’s as if he thinks, “I like you; I’ll show you. Not right now? All right, I’ll come back. I don’t mean to inconvenience you…” 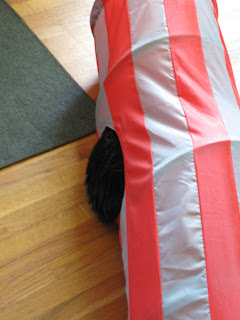 His timidity reached a peak a few weeks ago when he became frightened of my bedspread. Yes, that’s right. One day, he jumped up on the bed, stared at the cover under his feet, sniffed it, tapped it, then retreated to the folded duvet at the foot of the bed. After that, he refused even to sit on the duvet. I regretted that, as he stopped sleeping there at night, as well. Then, more recently, he recovered himself, braving the duvet at first, then even venturing on the dreaded bedspread. He has returned to sleeping on the bed at nights, in his spot on the near lower corner. He never seems to move from there during the night, and comes up to the top of the bed to greet me when I wake. 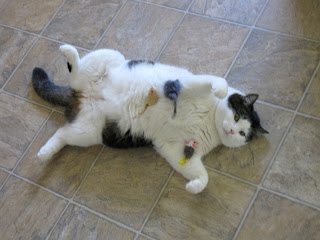 He had initially established a position of strength over Renn, who is two years younger. That has reversed itself now. The cats’ relative positions, not their ages. Now, Renn periodically smacks Tucker about. It’s never physically harmful, and much of the time, they will pass each other without a sign. But then Renn will need to demonstrate who’s in charge. I wonder if Tucker experiences some Schadenfreude when Tungsten puts Renn in his place.
Tucker’s noises are a wonder. He sounds like a monkey, a porpoise, a human baby - anything but a cat. Well, except when he purrs, which he does a great deal. I believe that he’s an animal who is easily pleased. A little attention carries him a long way. His appetite is strong: he will eat, or try to eat almost anything, though fish comes far down on his list, and I think it upsets his stomach, anyway. The only time he becomes assertive is when there may be food in the offing. 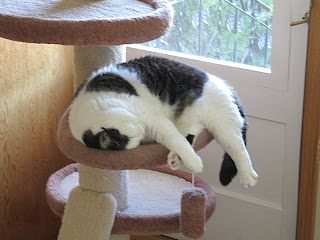 Like the others, Tucker has his favourite spots: the second platform on the lower cat-tree in the sitting room; the arm of the couch when I’m sitting there; the floor of the dining area, where he can stretch out.
He’s made himself at home with me and his feline roommates. Some day, he will be adopted, and have to accustom himself to new surroundings once more. That will be difficult for him, but he’ll find his place there, too, for he’s adaptable - as well as adoptable. But a little piece of him will stay with me. 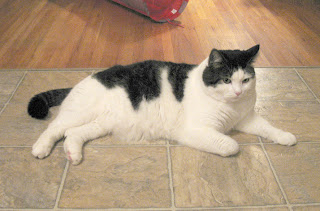 In this day and age, it’s not surprising that pets have weight problems, just as their owners do. Much of the food produced for cats and dogs is unhealthy in the long run, and domesticated animals don’t get the exercise that they should. For my part, I do try to feed my cats nutritious food. The hard food, which constitutes most of their diet, is California Natural, which is a good brand, but the soft food is Fancy Feast which, though decent, is not exactly a ‘health’ food. But then, when cats won’t eat other items, the merely adequate will have to do.
Exercise is another problem. I try to play with my cats but how strenuous that is depends upon them. Tungsten rarely plays, but her weight is not a problem - unless the problem is that she is too light. Tucker is quite active while playing, though Renn’s favourite activity is to lie in a nylon tunnel and ambush a string-toy as it flies by a hole. Josie, my Chubs, flops on the floor and grabs at the toys when they near her; she doesn’t chase them.
I keep an eye on the cats’ weight. I put them on an accurate set of scales quarterly, and see if anything changes. I decided to do this after Tungsten's last visit to the veterinarian. I was told that my tiny cat had lost a pound. When an animal has only seven of them to begin with, the loss of that amount is worrisome. But the next time she was weighed, the amount was back to the previous, normal weight. I suspect there was an error in the scales, as the orange one’s numbers have remained relatively constant thereafter.
I am currently a bit anxious about Tungsten, though. Her stools have been very liquidy recently, though these have alternated with more solid waste. (It’s rather sad that I can differentiate between the crap the various cats leave in the litter-box; but then, I meet it every day, more than I do my friends…) Otherwise, she is fine, eating as well as always, drinking her usual amount and being as active and/or inert as she always has been. It’s why weighing my animals is important: it may be the first sign of a serious defect in their health. In some cases, loss (or gain) in poundage may be the only warning an owner gets before the situation becomes critical. 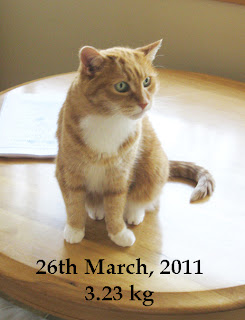 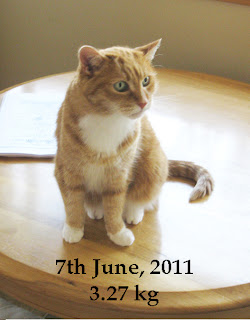 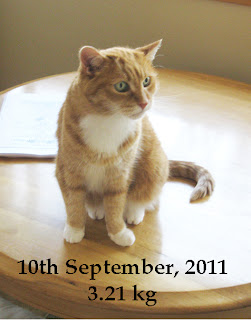 Josie is my surprise. She’s lost more than a quarter of a kilogram in the past six months. (That’s about half a pound in real measurements.) I think the stairs in my new house have helped with that: the food dish is on the main level while the litter-boxes are in the basement. As well, she does play chase with Renn and Tucker once in a while. And I think she is eating less hard food; her appetite has always been comprehensive rather than large, so she doesn’t fill up on soft food then repair to the hard food to eat to excess. She is my second lightest cat. I should stop calling her Chubs, really. But her frame is small, if you look at her; larger than Tungsten’s but not as big as the boys’, so what fat there is, is prominently displayed. I’m glad that Josie is losing some of her pounds, but she’ll always be my Chubs. 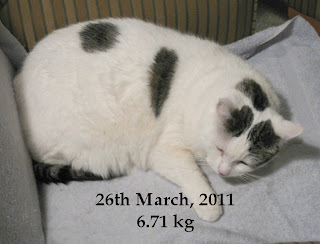 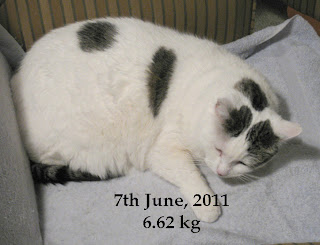 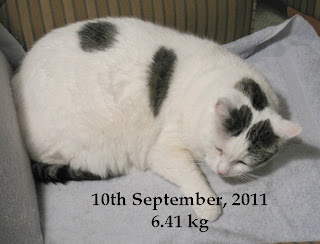 Renn has gained 0.17 kilograms (a third of a pound) but I’m not worried about him. He’s active and healthy, so far as I can determine. He’s a big cat. He has the biggest body of the four cats in my house, and when I pet him, I can feel his leanness. His weight is due to his natural size, and he could probably add more heft to his bones without causing himself trouble. 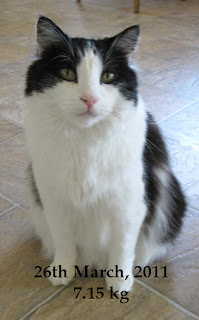 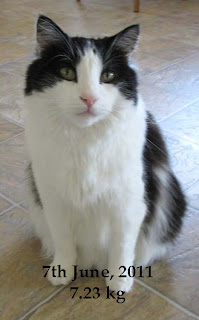 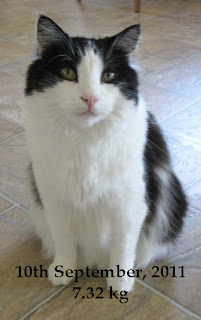 My anxiety rests with Tucker. That roly poly sausage has gained almost three quarters of a kilogram (more than one and a half pounds). I’m not sure where he’s getting all this from. He eats no more than Josie (admittedly, those two are my greatest eaters) but is fairly active, and is the most energetic at play-time. I have noticed that after most small bits of attention from me, a scratch behind the ears, a stroke on the side of the face, he will wander over to the food bowl and eat one or two kernels. It’s never much, and I’m not sure if it’s a nervous reaction to attention. Certainly, he asks for chin-scratches and head-rubs all the time, so I don’t do anything he doesn’t want, yet he often follows this with a bite or two. 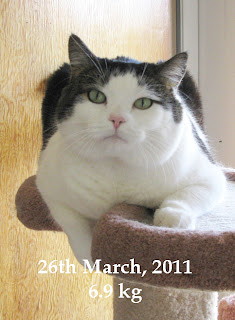 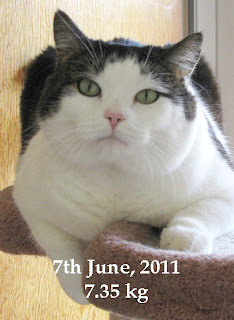 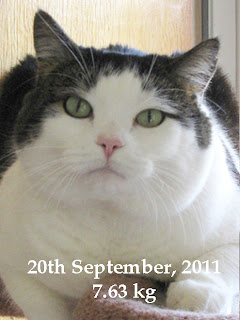 I may have to replace the food in the bowl at strategic times - perhaps during the night - with a special recipe, a ‘diet’ formula. I don’t want to do this, as all the cats love their food and their history with healthy comestibles hasn’t been flavoured with enjoyment. I will give the roly poly one another three months and decide after Christmas. After all, who wants to go on a diet during the Yuletide?
And yet, really, can anyone tell me where his neck went? 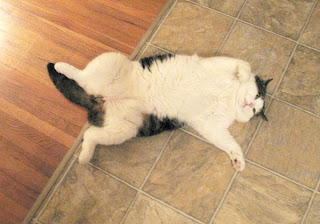