Whenever anything changes in the house, it’s interesting to note the cats’ reactions. For the most part, they have been favourable. I try, after all, to limit changes to good things - and not just for the sake of my pets.
I received a rug as a gift. It’s not new but it is in good condition, and the cats are enjoying it. When I rolled it out in the sitting room, the cats came over to see what this new object was and, of course, to smell what may have been smelled. 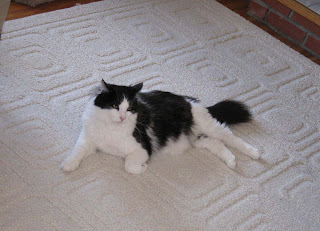 Renn thought it was acceptable abut otherwise ignored it except for a few stretches on it. Tucker was initially afraid of it and scurried away for shelter, but quickly came out to sniff at it. He decided he liked it and has been lying on it often. He still hastens away when I pull up a corner to sweep around it; he may think that it’s a big, flat creature which, as long as it’s asleep, is harmless. 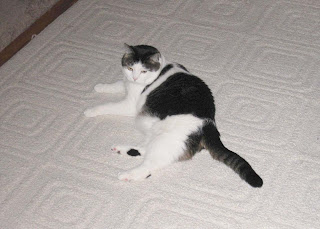 Josie was downstairs when the rug was laid out and came over when she saw it as if wondering how I could have introduced something new into the house without her first inspecting it. She seemed to like it, though, as she has used it frequently for stretching. Someone has already thrown up on it - either my Chubs or Tucker (both have sensitive stomachs) - dry food, thank goodness - so I guess that the rug is now officially part of the decor. 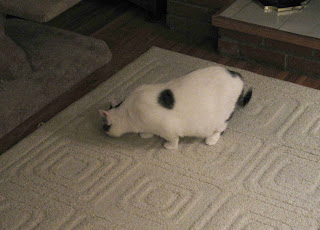 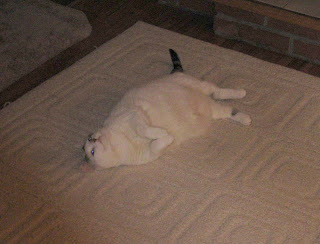 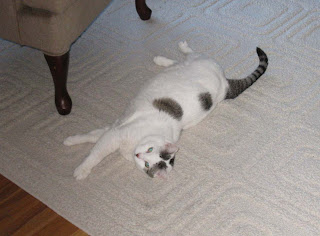 Tungsten’s reaction was unusual. The orange one does not play much. She normally watches with detached disdain while the other three frolic and roll and chase. But she does like one of the toys that the cats received at Christmas, a string toy that she enjoys grabbing and biting as it wriggles past her. But even in this, she is unique: she will play frantically for several seconds, perhaps even as long as half a minute. She throws herself about like a victim of strychnine poisoning, then abruptly stops and will not be tempted again by the toy for some time, sitting demurely, ignoring all blandishments, as if taken aback at her unseemly earlier behaviour. 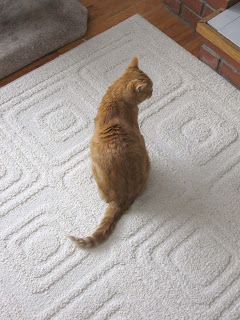 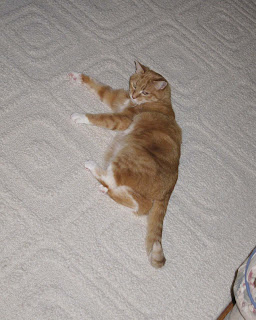 The new rug, however, has made her play more often. She will reach out and grab a passing furry creature on a string - it’s funny when she mistakes her own similarly coloured tail for the toy; she will roll about with it in her paws, or trap it under her skinny arms. She’ll leap into the air after it and bite it ferociously. Perhaps it’s the texture of the rug's material; certainly, she plays a bit more frequently when sitting on the mat just inside the front door than she does on uncovered hardwood. In any case, it’s good to see. I sometimes think that she feels left out as she sits and watches the others, like a man who ponders the absurdity of his fellows’ actions - until invited to join. 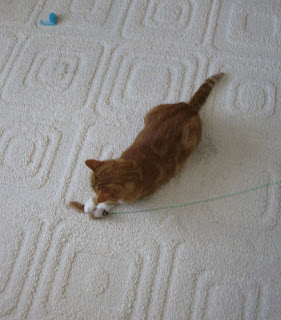 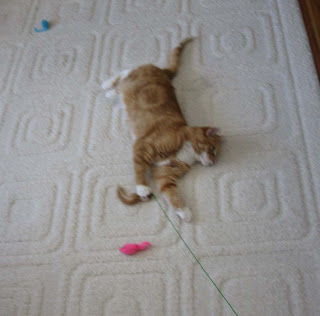 The simplest thing can change a cat’s life, though I don't suppose that aspect is much different than a human's life.
Posted by John Bellen at 6:19 AM