Renn is my big boy, a long, heavy cat, but, despite what a veterinarian once said of him, not, in my opinion, over-weight. His weight suits him. Besides, he eats very little for his size. He is healthy and happy.

But he is certainly a big fellow. His facial features are big, something he shares with his four biological brothers, and he has plenty of muscle. But he is lazy. He can jump and leap and run when he wants to, but he’s a lazy animal. When I come home from work in the evening, Tungsten and Josie and Tucker are there to greet me at the door. Renn is usually still in a cat-bed, looking at me. That he likes me is undoubted. He just doesn’t feel that he needs to rise on every occasion to show it.

He loves the heated cat-beds and can often be found in one or the other, though he doesn't fit in them - at least so it appears. I sometimes must turn him out if he and another cat are occupying them and Tungsten is feeling the cold. I bought the cat-beds with the orange one in mind, what with her advanced age and thinness, and though Renn deserves comfort as much as any, he’s my youngest pet and doesn’t need the warmth as much as my oldest. When I rouse him from his slumber - or just his lethargy - he whines and grumbles. I’d never heard a cat do that until him. He’s lazy. 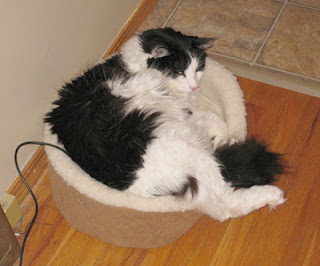 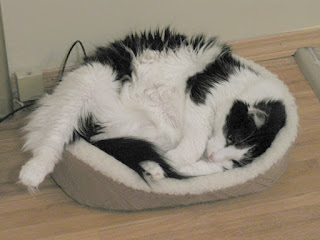 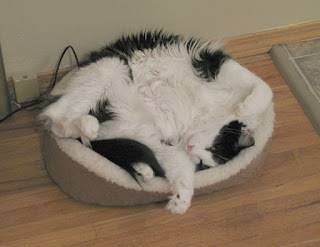 Renn does like to play but even then, his size gets him into trouble. He can zoom through the nylon tunnel but once in a while, he miscalculates and takes it with him. Other times, he tries to tackle a string toy that he sees through a hole in the tunnel, and that can lead to problems. 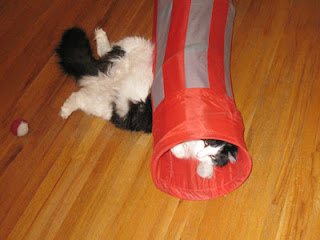 For his size, though, he is a timid fellow. But he’s come a long way since he used to run and hide at every sound, even from somewhere distant. He enjoys our regular visitors and can often be coaxed into meeting new ones. He doesn’t like fuss or disturbance, and would much rather lie easy on a cushion or bed, relax next to a bath-tub filled with steaming water, or receive a chest rub from a human. He’s a gentle giant. He’s my big boy. 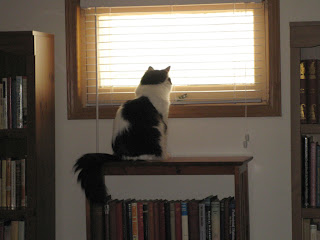