Enough of Cammie, what about Bear-Bear? I’m sure everyone is asking. Well, maybe not. But it’s time to catch up with the BB, regardless. 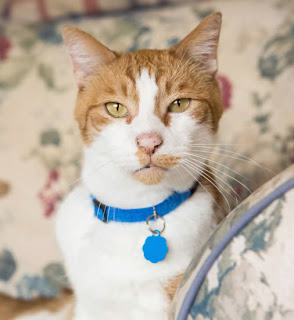 My male guest-cat is doing well. He had been picking on Tucker for some time, as the two vied for the penultimate position in the hierarchy, neither wanting to settle for last place. The roly poly one, after all, had been fourth out of four for some time, and didn’t like the idea of some newcomer stepping on his head as he ascended the totem pole. 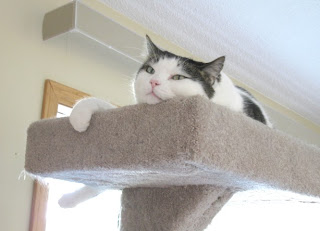 Then, I noticed that for about a week, Tucker had not been acting that way. He would lie on the floor, in a normal way, while the BB passed by him. He clearly didn’t like the new boy, but neither was he hiding, nor was he scurrying away. Bear-Bear, for his part, was not bothering the roly poly in the same manner. Now, this doesn’t mean that there isn’t strife in the land. Yesterday, I came home and found that Tucker’s nose had been scratched. Then, I observed that Bear-Bear’s had been gouged. Clearly, differences remain. But these don’t bother me. The odd row will occur, claws will come out and perhaps even blood will be drawn. Last night, however, hours after their skirmish, neither cat seemed overly aware of the other’s presence. 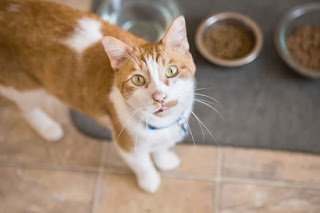 As for the other matters, though Cammie likes to snarl at the boys, the BB is gaining ground. He likes to sleep on the bed with me at night, and has moved from being enthused over Almo chicken drumstick flavour to Fancy Feast ‘chunky’ chicken. He is eating well.

He remains a little sad, it seems. It may just be his expression. He needs a full-time person of his own, and until he finds one, this foster-cat will stay somewhat wistful, I think. But despite his age (a mere ten years, though many people think that is old) and a rather rough appearance, I have hopes that this very friendly, very people-oriented cat will find his permanent home. 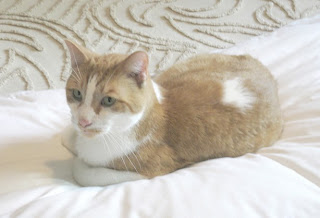