I realised last evening that I have not published anything on my blog for more than a week. I don’t consider it necessary to post anything if nothing is happening, however, and nothing new has occurred about which to write.

Even so, I was thinking about the situation in which I find myself - selling my house, or at least attempting to do so (no offers yet) - and the worry and bother that comes with it. This year over all has not been one of the better ones for me, and it is not improving. But something makes each day better.

I call my cats ‘my joys’. That’s what they are to me. Each day, they make me smile or laugh, or at least feel good. Last night, I lie in bed and listened to Tucker run about. I think he may have been chasing Josie, or vice versa. In any case, I heard two cats running, and there was no hissing or growling. Then I heard just Tucker. With his diabetes, his rear is still weak, and he lopes like a rabbit, but, remarkably, that hasn’t slowed him down. And he sings to himself. “Aaaooouu. Aaaooouu.” He is, as I have mentioned before, a cat who wants to be happy, and he’s not about to let diabetes get in the way. And he makes me happy because of it. Sometimes I need only speak his name to get him purring; look at him, and he squeals and twists his head about to be petted. Just the way he looks makes me smile: he’s hardly a cat in appearance; more like a wombat, or the dormouse from Alice in Wonderland. 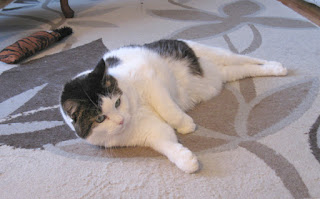 Cammie cannot be called a happy cat. And yet she too gives me joy. She can purr loud and constantly at times. Last night, I lie on my back and invited her on to my chest, where she stayed for half an hour. A waste of time on my part? It made me feel good and useful, so it was hardly thirty minutes poorly spent. The way she talks is unique: a series of creaks and squeaks, expressive and significant. And of course her hisses. I am glad that I’ve been able to offer her a refuge, even if it is also inhabited by three other cats whom she no doubt wishes elsewhere. The heated towels have returned to the parlour (and Noah has not) so the princess spends much of her time there now. I like watching her curl up there or even just crouch and drift off. 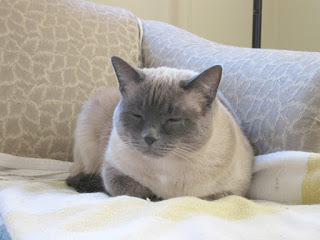 My big boy is a sucker for hearing his name repeated. I will see Renn thumping down the hall (his muscular legs are not as quiet as a cat’s) and start talking to him. His back will arch and he will rub against me, and then that engine starts going. Sometimes, if he is in my way, I’ll tell him to move, and he’ll throw himself back by first lifting himself up on his rear legs, then coming down on all four and trotting away. But he’s a lazy dog, and I chuckle when he groans and whines if he is forced to move. He is the first to come to bed and the last to get off it in the morning, the sluggard. 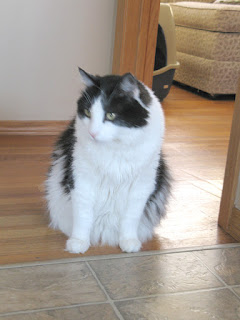 And Josie, my Chubs. Watching her patter away with her, shall we say, girth, waddling about beneath her always causes me amusement. I’m sure my reaction is an affront to her dignity. And she doesn’t growl, she cries out in anger, like an old lady insulted by a stranger. I can almost see her shaking her umbrella in fury. But she enjoys my company and loves a good petting session, even if she doesn’t lie still for it for more than a few seconds at a time. She is one of my new lap-cats, not overtly sensitive, but a softy inside. 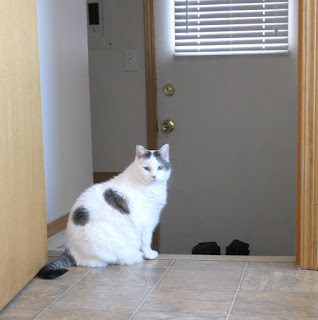 My beasts don’t delight me all the time. You should gauge my mood when all of them decide they dislike what is on the menu at dinner-time and I am left with a lump of unwanted food in each of four bowls. But when I come home from a day at work that was less than pleasant (fortunately those occur only five times a week), my bicycle moves a little faster knowing I will see friends when I reach my destination.

Wordsworth wrote a poem called “Surprised by Joy” (a title later borrowed by C.S. Lewis for one of his books). It is about realising with a shock that an important and tragic event had been forgotten. We all need to be surprised by joy now and then, but I think it is much better to have it so much in our lives that it doesn’t surprise us at all.
Posted by John Bellen at 10:24 AM