Don't You Have a Home to Go To?

I don’t have outsider cats like I used to. As I mentioned in an entry not long ago, I haven’t seen Sable and Sablette in months. Cecil, the new fellow, is actually rare in his appearances. Not counting Winkin, Blinkin and Nod, the raccoons - who sometimes bring a fourth (their cousin, Floyd), and the new skunk, Thaddeus, that leaves Finn.

Finn likes it at my place. I think he has adopted it as his summer residence. He almost always is waiting at the screen door come meal-times, which he has learned to mark on his schedule. In between, he sometimes lies in the tube-house; often, he takes his leisure in the shade of a tree not far away. This allows him to be close at hand for food at the cosy apartment. At one point on the weekend, I announced to everyone that it was ’snack-time’; I looked out the window to see Finn trotting hurriedly toward the screen door from where he had been snoozing. He learned the appropriate words faster than my beasts had.

Finn is a nice boy. Very quiet, he is one of those cats with an almost silent meow. He enjoys being petted and when I kneel down outside and beckon to him, he hastens over for long strokes down his back and vigorous head-rubs that he enjoys so much he purrs, kneads and drools all at once.

But Finn does have a home. One of my fellow tenants knows it. Though Finn could use a brushing, his people appear to be good to him. He was a bit out of joint lately due to his humans baby-sitting a puppy, so it’s no wonder he took to spending time elsewhere. It’s good to know that he has a permanent family. He is not under-nourished by his people; he just enjoys the extra rations at my place.

But when I turn on the outside light at eleven o’clock to take one last look around before bed, and I see Finn almost pressed up against the screen, hoping for a final bite before retiring, I do have to ask him, “Don’t you have a home to go to?” 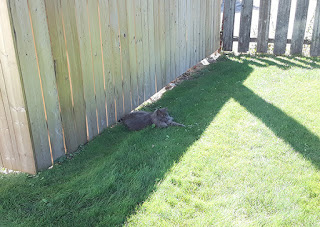