Renn is feeling better. His indisposition did not last long, though he is still sneezing once in a while. I would have been surprised if his illness had lasted as long as it does in other cats. My big boy rarely feels under the weather, and when he does, it rarely affects him strongly.

Even so, he was in a particularly good mood after dinner yesterday, and lie on my lap for about twenty minutes. He is never averse to that, but nonetheless doesn’t come for a lie down on me often. He is not built for being a lap-cat, but certainly has the affectionate character of one. 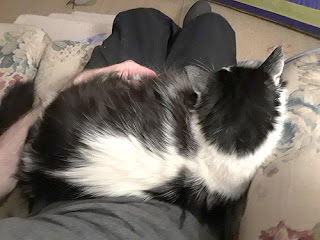 Afterward, he went to snooze in the new cat-bed. He has been lying there as much as the others. Only Neville doesn’t care for it but, like Parker before him, Nevsky prefers the open spaces, in his case, either the carpeted floor or the wide top platforms of cat-trees. Renn, however, enjoys a cosy spot, whether it’s a well-padded bed, or me. 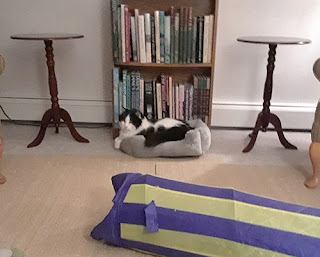