The Horror of the Closet Unleashed

Last night something happened which, though it caused no permanent damage or injury and, in fact, is funny in retrospect, caused me to think about consequences.
Renn periodically asks to be let into the back parlour’s closet. There are some bags and boxes there, and my big boy likes to rummage about, perhaps seeking something to fire his scientific interest. He certainly has a curiosity in all things hidden. I let him explore and then go about doing whatever it is I do. Last evening, Tucker followed him in. 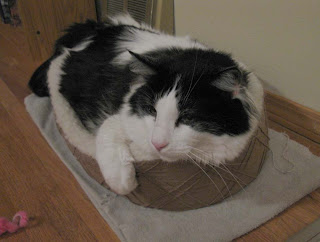 I heard, after a few minutes, a rustling, scraping, crunching sound. I guessed that the two were going through a plastic bag full of toys that I keep in store. I never let the cats near plastic bags when I am absent. What’s bad for children is bad for pets. But Josie likes nestling among the bags I keep in the front closet and Renn likes examining bags elsewhere. As long as I can see or hear them, I consider it safe.
This night, I heard a flurry of rushing and, a second later, Tucker bolted from the closet, followed closely by Renn. I thought they were chasing each other, something they do which my big boy always likes and Tucker sometimes does. Then I saw that a plastic bag had looped itself around Renn’s head and shoulder. He was fleeing in terror from this creature which had latched itself on to him, and Tucker was running for his life ahead of him.
Into the sitting room they rocketed. The bag must have burst there, for there were balls and string and fuzzy mice everywhere. But the monster clung to my big boy regardless of any wound it may have suffered. Through the kitchen and down the stairs, Renn dashed; Tucker was frantic to get away from him but Renn followed, probably thinking only that Tucker knew of a safe place to hide.
Calling to them was useless and it wasn’t until they charged up the steps again that I managed to capture Renn, letting Tucker fly by first. Renn was in no frame of mind to reason; he was frightened, and growled and hissed (the latter a rarity with him) when I tried to break the plastic loops that fettered the evil creature to him. I managed to persuade him to keep still while I fetched a pair of scissors, with which I cut away the bag. Renn, freed at last, hurried off.
Tucker retreated the refuge of the top of the tallest cat-tree, while Josie scurried downstairs and only returned as far as the top stair. Tungsten viewed the whole debacle with detached interest. I wanted to see if Renn had injured himself and started petting and stroking him while he lie on the bedroom floor. Soon, he was purring his rough enjoyment and I was able to examine him for damage. All was well.
I decided that treats were in order. At first, I had to give Tucker his on consecutively lower platforms of the cat-tree, to coax him down. I did the same with my Chubs on the stairs, providing treats increasingly farther into the kitchen. For the rest of the night, Josie eyed Renn warily, but by bed-time, everyone was back to normal, and ready for a good night’s sleep.
This has persuaded me not to let any of the cats near plastic bags, whether I am present or not. Perhaps I should have made this decision earlier; on the other hand, I may be overly cautious. Renn loves exploring new things, but he is also very sensitive and easily frightened. There are many other, safer playthings available. Though I can see the humour of it, my cats may not share such amusement (except perhaps Tungsten, who was probably chuckling disdainfully the whole time), so I will be careful. For the next little while, though, I don’t think I will need to be. Renn likely won’t ask for entry to the closet of fear for some time. 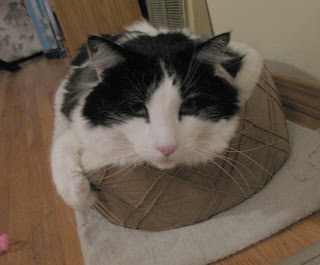