Tucker is my newest cat. As you may know from previously reading about him, I fostered him for more than a year. He had troubles in his prior home (what was meant to be his permanent home), in that he wet where he shouldn’t. When he came to live with me, he wet in a couple of cat-beds. I explained that in a past article. However, it was a bit of a renewed concern with me lately because I bought a new cat-bed. I wanted to put the almost-as-new heating pad under its cushion to provide perfect comfort for my beasts, especially Tungsten, the oldest and thinnest, during the winter. I bought one cat-bed initially, to make sure Tucker didn’t do something in it he oughtn’t.
He didn’t. He was cautious about the new furniture, but largely ignored it, so I bought a second cat-bed, then a second heating pad to go into it. Tucker remained the only cat not interested in trying the beds.
Last week, I put him near a cat-bed and he examined it. He sniffed it, he stood on its cushion but, ultimately, he decided that he didn’t care for it. That has changed to some extent. He now can be found from time to time curled up in one of them, whether the heating pad is plugged in or not. I wouldn’t have believed that his sausage shape could curl as it does, but he achieves it with, apparently, no discomfort. I have not been able to record the event on camera yet, as he tends to get up and walk away most times that I try. 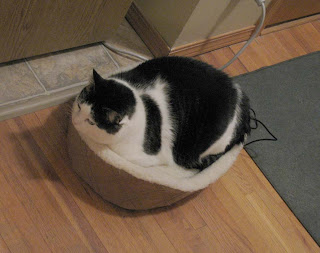 However, Tucker does seem to enjoy the new beds. He uses them the least of the four animals, though this may be influenced by the fact that the others, logically, use them more, and therefore they are not always available. Tungsten and Renn are the cats who can be found in the beds most often, and I’m glad to relate that when Tungsten finds my big boy occupying the favourite bed, she does wander over to the other, if that is vacant.
It’s good to know that my pets like the new furnishings. Practically, it’s good because they represent money spent, and one likes to see it translated into something useful. Sentimentally, I just like watching the beasts as they settle down for a snooze in comfort. Now, I can watch Tucker do the same, now and then. 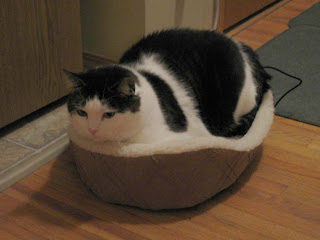