A New Cat in a New World

Bear-Bear is adjusting well to living with me and the perma-cats, but I think he is having a bit of a reaction. I’ve seen this in other felines when they come to stay with me, either temporarily or otherwise. They often appear adventurous, friendly, inquisitive at first, and then suffer a bit of a relapse, turning a little melancholy or even depressed. The reaction varied greatly among the cats I’ve observed.

My first cat, Tungsten, explored a bit when she first came to live with me, looking into this, looking into that. Then she retreated to the bedroom and lie on the bed for the rest of the day. But that night, she slept with me and was fine in the morning. Tucker, on the other hand, became so distraught at being put in a new setting that he stopped eating, and had to be force-fed (it sounds worse than it is) for almost a week. Then, he too, recovered and became the happy little sausage he remains.

No matter the environment from which the cats come, no matter where they find themselves, being wrenched from the only home they’ve known, at least for some years, is a big adjustment. Others must learn to be indoor-only cats, after a period outside, with all its freedoms and dangers. One can be homesick for surroundings that were indifferent, even unpleasant. The attraction of the familiar can be as strong, if not stronger, than the advantages of a better life.

Bear-Bear has been a cheerful, easy-going fellow since he came to stay with me. But I’ve noticed that he is a little quieter now, and has resorted sometimes to a corner of the siting room behind a cat-tree. Other times, he lies on my lap, plays and wanders about talking. I think he is feeling a little neglected. I intend to spend more time with him, especially in the evenings, inviting him to play and sit with me. The perma-cats know my routines, and have their own. They seek me out when they want attention, knowing that I rarely deny it to them, even if it’s only a few minutes’ petting. Bear-Bear doesn’t know he can do this.

I think I will also try to encourage him to sleep in the bedroom, possibly as a precursor to sleeping on the bed. There may be room for one more there… I will get a comfortable cat-bed for him and see if he will consent to sleep there on the floor. Later, he can work his way up to the bed. I think that last night, he slept on the cat-tree by the window, not an uncomfortable spot, and one from which he can view the nightscape outside when he wishes. But it made me think that he must be feeling a little of an outsider, which I don’t want.

I will also keep an eye on his health. He is an unknown quantity to me and therefore needs extra watching and a little more attention than the others. I believe he’s a naturally happy boy, and requires only small things to stay that way: a full tummy, a soft bed and affection. But I suppose that’s all most of us need. 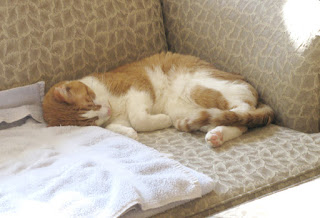