The Skinnies and the Fatties

I have two kinds of cats in my house, plus another who doesn’t fall into either category. The pairs are the skinnies and the fatties.

Tungsten has always been thin, with no fat on her at all. Her slender form has only recently become a concern, since she has developed hyperthyroidism, and will lose weight even if she eats a great deal. I’ve chronicled her fight to regain some poundage, but what is new is that her weight is stagnating. She is holding steady around 2.65 kilograms. That isn’t very bad for her, but it is not good, either. She can’t seem to increase her numbers any more than that. 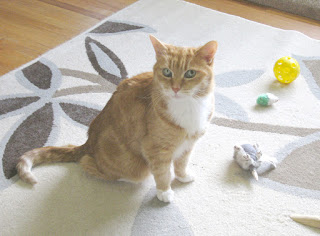 The other skinny is my foster cat, Bear-Bear. This fellow surprised me by losing almost two pounds between the time that he came to me a month before. One would think that I was starving him, and perhaps, inadvertently, I was. He obviously needs to eat as much as possible. 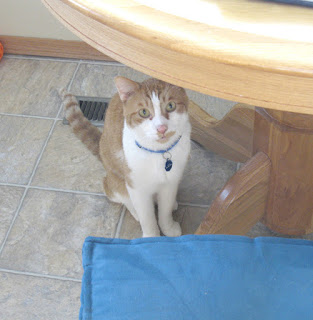 These are my skinnies. The solution has been to re-introduce the brand California Natural to the hard-food bowls at my house. This food is, I believe, not quite as healthy as the Blue Buffalo with which I replaced it, but is still good for cats - barring the recent recall of salmonella. The arrangement and timing of the availability of food has been altered somewhat, as well. Soft-food is fed to all at dinner-time (about four-thirty each afternoon) and snack-time (about eight o’clock each evening). I also give Tungsten and Bear-Bear a helping of it in the mornings before I leave for work, and at night before I go to bed. California Natural hard-food is available throughout the day from the time I wake up until dinner-time; it then disappears until the next day. Blue Buffalo is always at hand except for the evenings. It comes back out at night. There is also California Natural available around the clock on top of the refrigerator where only my skinnies can get to it.

With this complicated arrangement, I hope to allow the skinnies access to plenty of both hard- and soft-food. The California Natural must taste better than Blue Buffalo (which to my simplistic mind suggests that it is not quite as healthy) for it is eaten in far greater preference. I am hoping that it will pack on the pounds for the skinnies while keeping the gain among the fatties at a minimum. 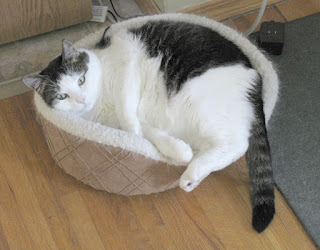 Did I mention the fatties? They are Josie and Tucker, of course. I am sure they will increase due to the accessibility of the California Natural. Over the past few months, their weights have remained constant, so I will see how they fare on this new regimen. I may have to allow them to grow in girth in order to keep my skinnies gaining. 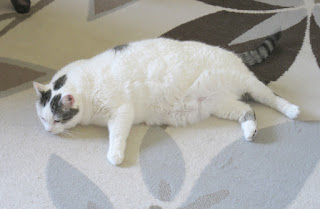 But if you have been reading this blog for any time, you may have noted a missing number. Renn is neither a fatty nor a skinny. A veterinarian considered him overweight once, a couple of years ago. It’s been difficult for me to agree with that assessment; no one who sees my big boy thinks he is overweight. He is heavy, but he is also larger than any of my other cats. His legs are like turkey drumsticks and he’s as long as a border collie (see illustrations from previous post.) It would be hard for me to curtail his food supply without starving him, as he eats, neither like a cat nor a dog, but like a bird. So if he wants to eat more, he is welcome to it.

I am therefore stuck right now between the skinnies and the fatties, with Renn watching from the sidelines. 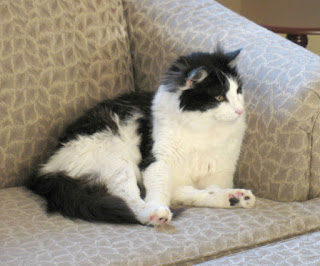