A Long Cat Hangs Out

Every cat has its own style of doing things. One looks eager, another timid, a third apathetic. It also depends on what it is doing. Looking out a window, for instance, depends for its posture on where the window is, its structure and what the cat has to lie or sit on while looking out. 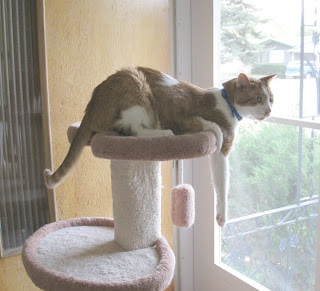 My foster-cat, Bear-Bear, is a long, tall beast. His tail is the longest I’ve yet seen on a cat, and perhaps he has trouble deciding where to put his limbs. Since he has taken to sleeping on the bed at night, those limbs often end up in my face. He likes being cosy with a person. But when peering out a window, he will often hang his front legs over the edge of then platform. Sometimes, he will let them dangle their whole length; other times, they will be drawn up a bit. In any case, they show just how long a cat he is. Relaxed and easy-going, Bear-Bear’s pose shows his character, as well as his style. 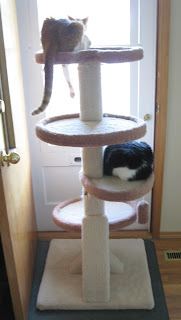