The Return of Rachael

Yes, one of my former foster-cats has returned, though only for a week. Rachael is a quiet, long-haired female, whose sensitivity made it advantageous for her to be placed in a foster-home with no other cats. She has been doing well there, where she can roam about the whole house and receive the undivided attention that her guardian has to give her. 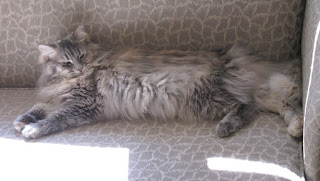 That guardian, a long-time, and devoted, volunteer of the PAW Society, the cat-rescue group whom I too help, is on a deserved holiday for a week. Rather than leaving Rachael in her house, alone except for short, daily visits to stock up food and water and clean the litter-box, it was decided that Rachael should come here, where she would have some company.

She is staying in my parlour, where she stayed so long before. No one thinks her condition would be improved by letting her out among my crowd; that did not help her when she was my foster-cat. She is, unfortunately, in isolation for her time with me, but it is only for a week.

I thought initially that it may have been a mistake, bringing her here, uprooting her from known surroundings. Considering her sensitivity, I thought it might be worse than keeping her in her foster-home, albeit alone. But Rachael has clearly improved in her new foster-care. She was growly and hissy the first day here – as who wouldn’t be? But the next day, she was her old self, quietly talking in her tiny, rusty-hinge way, coming close to me for petting and not at all seeming stressful. An improvement I noticed was that she came with only one litter-box. She previously needed two, as she was very fastidious, and refused to use one that she had already soiled. This appears no longer to be the case, and she satisfactorily uses a single box. I am conscientious about scooping the contents, just in case, but I noted that she has used it twice on at least one occasion, and has had no complaints about it. 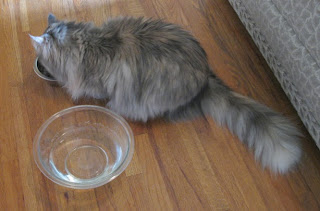 She is plainly bored here. If she were staying for a long time, I would cautiously re-introduce her to the perma-cats. My other foster-beast, Bear-Bear, would be an excellent start to integration; I can’t see him inducing nerves in any animal. But Rachael will be gone relatively soon, so she remains in the parlour. She has fresh air, a view, a choice of comfortable places in which to snooze and, thankfully, the temperature has fallen during the day, for the time being. The first full day of her time here, I felt constrained to turn on the air conditioning; though the rest of the house was bearable, the parlour receives the full warmth of the setting sun in the evenings, and Rachael’s long hair must have heated her considerably. 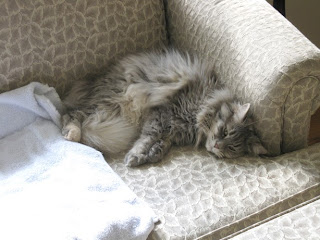 Tonight is movie-night, and my movie-time couch-pal, Renn, will have to do without this evening, as I will be watching a film with Rachael. I suspect she will be as interested in what’s playing as my big boy. But she may enjoy a bit of companionship nonetheless.
Posted by John Bellen at 6:17 PM