I think Parker had an accident last night, and may have hurt himself. He has been jumping up on the kitchen counters, and even the stove-top, as I have mentioned in previous entries. I believe he attempted it last night and failed.

I was in the bedroom when a heard a loud noise, much like a crash, from the kitchen. I came out to find Parker lying on the floor, looking quite nonchalant, and not at all hurt. But I noticed several claw-husks around him. His claws had not broken, but I suspect he had lost some husks trying gain a purchase before falling. I checked him over and he seemed uninjured, but I can’t exert too much pressure on his body anyway because of his condition.

For the rest of the evening, the orange-boy seemed a little out of sorts; subdued, even for his current state. He didn’t want anything to eat, but that was no indication of extra trauma: he had eaten very well at dinner-time.

This morning, he ate a good breakfast in terms of amount, but he seemed almost reluctant in his attendance to the food. Yet he kept wanting more, so I can’t complain about it.

I think that while Parker may have hurt himself a little last night, the greater damage has been to his self-esteem. As his cancer progresses, he will find that there is less he can accomplish. His strength will decrease, his stability will diminish. My sturdy-boy is facing the sad realisation that he is no longer sturdy. 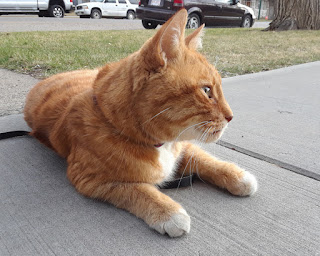