If He Would Just Wear a Monocle...

When Raleigh came to live with me, he was in rough shape. He had, and has, FIV and stomatitis. The former we watch - or rather, we watch for its effects - and the latter we treat with Prednisolone. He has a chronically leaking left eye. He drools, and he doesn’t groom himself as he should. And he has mats in his fur.

For some reason, these mats, little knots of hair, are restricted to his rear flanks. Perhaps they represent the limits of what he did groom in the ‘wild’. He didn’t seem to acquire any more after coming to my apartment. Nonetheless, they are unhealthy and probably uncomfortable. While he lies on my lap, therefore, I slowly brush them out.

I could, and do, use a comb now and then, and I could cut them. But such is Peachy’s fright at sudden movements or actions that he deems threatening (which is the majority of a human’s actions), that I prefer to use the gentle approach of brushing while he is relaxing. The advantage to this is that he likes being brushed. I can feel him slowly melt onto my legs as I slowly pull the brush back. When I reach a mat, I brush over it, slowly but repeatedly, sometimes giving it a series of soft tugs. He appears to stand this much better than a similar effort with a comb.

Progress is slow, but I have cleared up most of the mats on his left side. His fur is gradually looking better and feeling smoother. Raleigh will never win any beauty contests, but he is becoming a rather presentable gentlemancat. Perhaps with a topper and a cane, he will be welcomed in the best establishments in town. Now, if I can just convince him to wear a monocle… 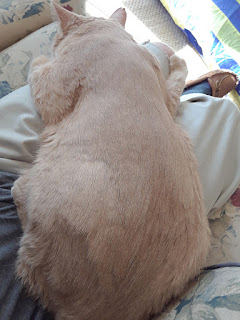