Cammie’s adventures in Medicineland continued yesterday. I felt I had no choice but to take her to the veterinary hospital. Tuesday night, she seemed in discomfort, and around her mouth was crusted discharge, likely to be bits of unswallowed food. In any case, it was unprecedented for the princess, and I thought it best to have her seen by professionals, especially before the weekend.

I dropped her off early and picked her up later in the day. In between, Cammie was examined physically and had her urine tested. I chose not to have her blood tested; that had been done in late summer, and the doctor felt that her problems probably stemmed from worsening kidneys. This is the case. 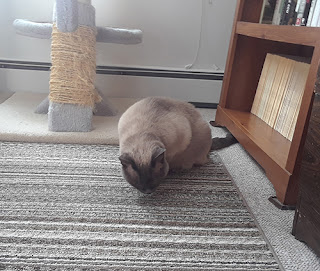 Cammie is now in stage three kidney failure. Though her creatinine is at an acceptable level, her urea has been increasing and seeping into her joints. She has, in effect, gout. This has been causing pain for her, especially when she moves. The doctor told me that it could even have ben affecting the gums, which might go some way to explain why Cammie looked as if she were having trouble chewing even soft food, and why she didn’t want to eat.

My Siamese girl was given sub-cutaneous fluids, to help flush out the urea, and relieve the pain. The level of her benazepril dosage, taken for her blood-pressure, will be re-assessed. For the moment, Cammie is in better shape than she was earlier this week. 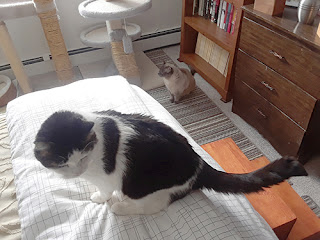 I must learn how to give sub-cutaneous fluids, and to do it by myself. I feel that Cammie would be cooperative enough for me to achieve it; the actual mechanics of the process elude me. For that, I will have to watch some videos. It would, of course, be much easier with a second person, but that isn’t always feasible, and certainly isn’t in the current global situation. But such fluids are the best way to ease my cat’s discomfort.

The doctor stated that examining Cammie was a little difficult. Cammie was angry at the staff of the hospital. In other words, my princess gave them what-for. That’s my girl. But she was undoubtedly frightened and confused. It’s bad enough for a sighted cat to endure such a day, but for a blind one, it must have been terrifying. She was quite agitated when she was returned to me, but in the taxi-ride home, I spoke to her and touched her through the bars of the carrier’s door. She continually rubbed her face against my fingers, and was calm by the time we walked through our front door. She ate later and, so far as I could determine, had a restful night.

Once again, then, we have a plan, a route mapped out for my girl through Medicineland. It’s up to me now to provide her with the tools to navigate her way, so that the path to her last years is easy and smooth. 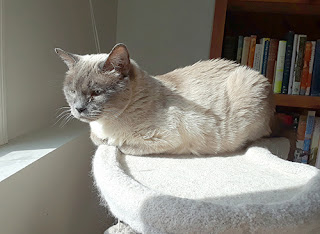