The Letter of the Law

We don’t have a top-cat at the Cosy Apartment. We have had only one top-cat, and that was Tungsten. She was like the great barbarian chieftain who managed to bring all the tribes together under her rule. When she died, the tribes began squabbling and the confederation disintegrated. There is no ruler anymore.

Josie comes closest, I think, but she cares to assert herself only at the food-bowl. She is more of a ‘first among equals’ than an actual leader. When she wants to eat from the hard-food bowl, and there is already a cat present, she will stare at them. Then she will step closer, and stare at them some more. Rarely, it will come to blows, but the Great White always wins.

Neville, being the newest, had to learn the rules. He has, but his interpretation of them is unique, and literal. This is his reaction to Josie’s unspoken demand that he move away from the food-bowl. 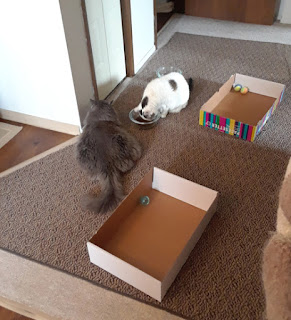 Josie was clearly uncomfortable with the proximity while she ate, but she was hungry and Nevsky had done what he was told. This is what happens when you being a barrack-room lawyer into the household…
Posted by John Bellen at 5:13 PM