Most early summers, it seems, southern Alberta experiences at least one severe rain-storm. The worst, so far, of this year, which has been a relatively wet one, occurred Wednesday evening. It started with thunder and continued with rain. The precipitation came down hard and heavy for about twenty, perhaps thirty minutes, in my part of town. Elsewhere, even within the city, there was hardly any fall of moisture at all. There was even some hail, which I dislike; aside from destroying crops in the country, hail can block drains and cause flooding within minutes. Fortunately, it did not happen this time. (Though, afterward, I overheard a householder across the alley commenting that there was water coming into her basement. The basement in my old house never flooded, but I think of it every time we get heavy rain.) 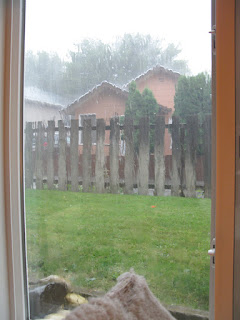 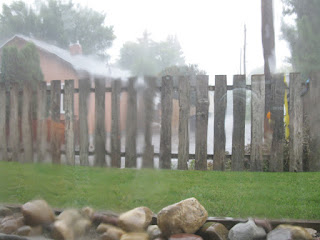 The cats were unnerved by the weather. Cammie hides at the first sound of thunder. She is quite frightened by it, and seeks refuge under the bed or behind the library’s bookcases. Renn disappeared, too. I believe he slinked under the bed. For a big mancat, he still struggles with his bravery - which is much stronger than previously. Still, this storm was extraordinary. 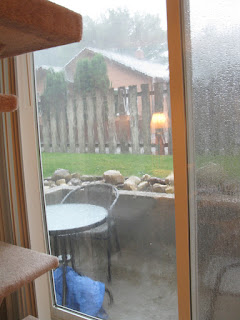 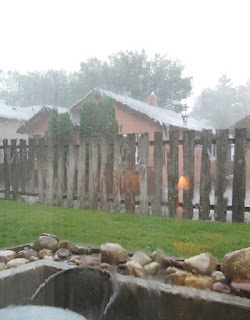 Josie and Tucker did not hide, but they moved as far as they could from the external walls. The rain fell with force and made a tremendous noise. I wonder if they knew it was the rain, or merely associated the disturbance with the precipitation. Certainly, they could see the rain, if they ventured near the windows.

The evening, for the beasts, was not improved by the fact that the storm abated, then returned - trickery that they must have found disconcerting. 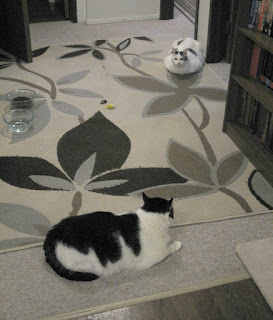 But at last the tempest receded for good. The cats-in-hiding emerged. Renn arched his back and wanted attention; he seemed embarrassed by his lapse of courage. Cammie was consoled with some time on my chest, where she purred and recovered. The four of them spent the rest of the night smelling the wondrous scent of freshly fallen rain. That at least was some compensation for both storm and stress.
Posted by John Bellen at 6:38 AM