His Fear of Food

If you have been reading this irregular record of my cats for a length of time, it will come as no surprise to you that Tucker is a sensitive creature, even for a cat. This is an animal who, when he wants to show affection, will come from across the apartment to rub against my leg, but the slightest movement on my part while he is doing this will send him scurrying away. It may be expected, then, that his reactions to food are also sensitive.

The roly poly one throws up his food, usually the soft-food, now and then. It’s not often, but it happens. When it does, he is afraid that he will be chastised. Sometimes, when I have groaned at having to clean up a mess, Tucker has taken it personally; the other cats do not. Thus, I have tried to refrain from any adverse comment when the chuck is upped. That’s difficult when someone disgraces a bedspread or something similar. But, no matter my reaction, Tucker takes it hard. This time, he threw up in the nylon tunnel. It wasn’t a great amount; it rarely is, with him. But it left him temporarily afraid of soft-food. 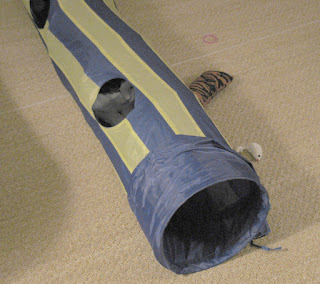 Don’t be alarmed. This is Tucker of which I write, after all. He is eating and, actually, eating well. And he is no longer frightened of tinned nutrition. But when it is soft-food meal-time, the sausage-cat still hastens to hide - in the nylon tunnel. Why he chooses this spot, the location of what he may consider his shame, in which to hide, I don’t know. But that is where I have been giving him his initial bowls of food. He is no more reluctant to eat his portions now than before, but he nonetheless prefers them, at least at first, in the nylon tunnel. He eventually comes out, and second or third helpings (as I wrote above, he is eating well) are provided outside the tubular environment. And just in case you’re wondering how fat I want my pets, each helping is little more than a heaping teaspoon’s worth. I don’t think any one cat of mine has eaten more than half a small tin at one sitting. 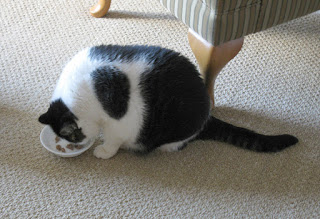 And so, while I serve Josie’s meals to her on my bed (yes, I know; that’s begging for ruined bedclothes), Cammie’s on her cat-tree or the library bookcases and Renn’s in his cylinder-house, I cater Tucker’s while he lies in the nylon tunnel. This will undoubtedly change, and change suddenly, in a week, a fortnight, or a month. It usually does.

I see some people serving their cats’ food in bowls on the kitchen floor, in a spot designated for food, every meal-time. That doesn’t happen in my household. Here, I have cats who fear their food, but who look forward to eating it nonetheless. Here, I have Tucker. 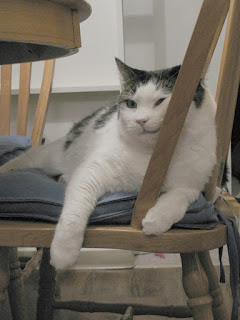