There was a surprise visitor to the apartment this week, someone who had never been here before. His name is Raf and he is a dog. His guardian brought him when she came to pick up some rescue-group paperwork. He was kept on a leash but even so, the reactions of the cats were interesting.

I can’t recall if any of the beasts had seen a dog before, except for Cammie, who had lived with a canine roommate. The princess stayed in the bedroom the whole time and, though she saw Raf, she didn’t evince much of a reaction. I don’t imagine she would have behaved much different toward him as she does toward her feline siblings. 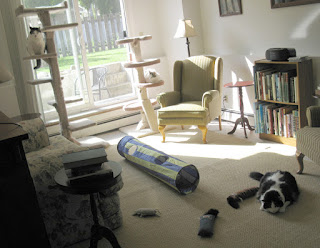 The others were wary, to say the least. Tucker and Josie retreated to the heights of cat-trees. Renn skulked behind an armchair at first, but then, the brave boy, sneaked out to take a closer look. The atmosphere seemed more one of astonishment and surprise than of fear; amazement at this strange creature who had been allowed into their home.

And the object of these sudden emotions? 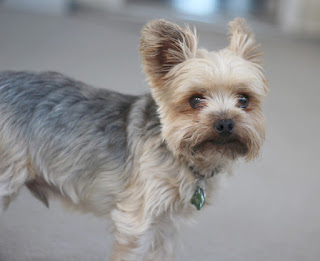 Terrifying, isn’t he? Actually, Raf is a friendly little fellow, very nervous and jittery, but willing to make friends with whomever doesn’t startle him too much. I can’t imagine the scene had dog and cats come within sniffing range.

Thank you, Raf, for enlivening the cats’ afternoon.
Posted by John Bellen at 12:30 PM