The second Saturday of every month, the rescue-group to which I belong, the Lethbridge PAW Society, visits the Homes Alive pet-supply shop downtown and shows off a cat available for adoption. This time, it was Nicolas’s turn. He did very well, considering that it was his first time in public. He is very gentle and a little timid but gets along with other cats, especially his sister, Isabella. There is something that others than myself have noted about this little fellow: his resemblance to my Renn. 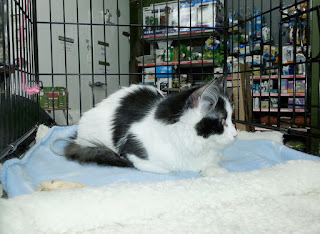 The colouring, the longish hair and even the larger nose are all the same as my big boy’s, though on a small scale. I have seen certain patterns repeated in cats. Kim at Musings on a Small Life (http://keaslife.blogspot.ca/) once had pictures of a white cat with tabby markings and a ringed tail with a dark stripe down its length, just like my Josie. Undine at Strange Company (http://strangeco.blogspot.ca/) has a cat whom she says could be Renn’s twin – and whose fur is ‘rusting’ just like my big boy’s. I wonder if, once breeds get mixed up and ‘mongrel’ cats are produced, dominant genes create repeated patterns. 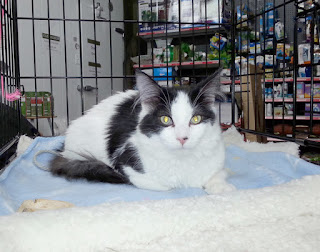 If so, then I predict a good and healthy life for this little Nicolas. He was a little under the weather this past Saturday, it’s true, but, come to think of it, so was I. However, my Renn is now eleven and has rarely been sick. And friendly? Renn is anxious to like everyone – as soon as he overcomes his shyness. 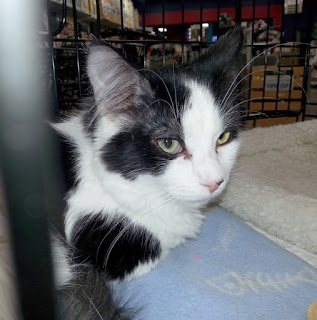 So let this entry be a comparison and an advertisement. Nicolas is a friendly, fun, gentle six month old – so friendly and gentle that he tries to climb up people but fails because he doesn’t like to use his claws. And he may just turn out to be like my favourite big boy: a friendly, fun, gentle eleven year old. I’ll let readers draw my conclusion. 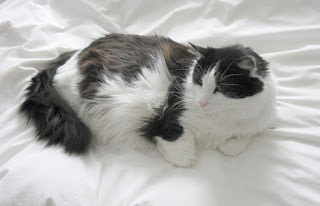