I have always tried to provide plenty of water for my cats to drink, and I think I have an adequate number of bowls, and have placed them in the right locations. This seems to be borne out by the fact that each of my four beasts prefers a different one of the four water-bowls available.

Despite the fact that many cats do not care for water near their food, there is a bowl near the hard-food in my apartment. My roommates don’t seem ever to have been particular about the proximity, but it is Renn who chooses to drink from that bowl most often. He can frequently be seen staring, unmoving, into the depths of the liquid for minutes before he actually drinks. (In the photograph below, the food bowl had been removed for replenishment.) 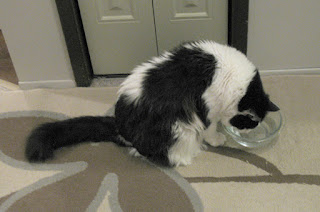 Josie likes the little bowl in the bathroom. I think I may have written previously about how she will give a mild screech to remind me to re-charge the contents, even when there is plenty of water remaining. She enjoys the freshest of refreshment. 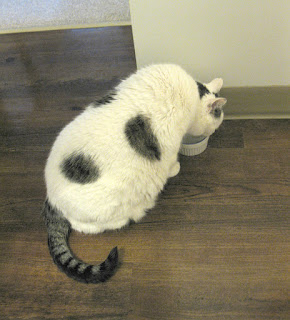 Cammie, meanwhile, seems still appreciative of the small bowl I place on the ledge of the bedroom wall. I will sometimes see her drinking from it early in the morning or late at night; even after I’ve gone to bed. I will hear a slapping, clicking sound that I usually misidentify initially, only to make out a small silhouette in the dark, crouched over the bowl, lapping up the water. 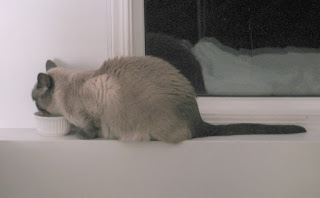 And lastly, Tucker drinks principally from the large bowl in the library. Now and then, Renn will study its water, forcing Tucker to wait until my big boy is finished - though I will move the latter on if he prolongs the roly poly’s thirst too much. Also, Tucker will tire of waiting and go to the bowl by the food, yet will return to his favourite as soon as it is free. 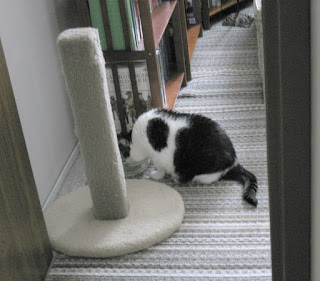 Perhaps there is something about having one’s own bowl that appeals to the beasts, perhaps a certain taste to the water, or a way of being able to drink it. Or maybe they like being left undisturbed. Each cat does drink from other bowls than his favourite, but each comes back to the one that suits him best. We humans have our preferred cups for tea or coffee, a glass that fits the hand better than others. There should be no surprise if an analogy may be applied to our cats, too.
Posted by John Bellen at 12:10 PM