Parker continues to enjoy his walks, though the smoke from the forest fires in British Columbia cause him to stand in one place and conduct a great deal of sniffing. For the most part, though, he wanders along, smelling the plants along the way, listening to the traffic and looking at the birds. He has acquired a number of admirers who see him and call to him. He goes to them to be fussed over. Most who notice him have a pleasant - or surprised - comment to make.

But I’ve noticed something as well, something about Puck’s toes. He has a grey patch on the front of each foot. As he walks it grows darker (dirtier, probably) but the white of his feet does not become discernibly dingier. I wonder if it has to do with something else, perhaps blood-flow; he is certainly getting exercise. I know nothing of such biological matters, so it is probably just dirt. But once home, the orange-boy cleans himself and relaxes. Discoloured toes or not, he loves his walks. 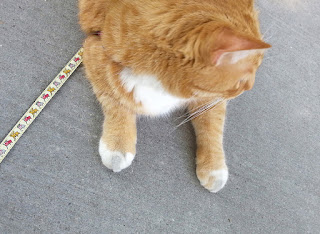 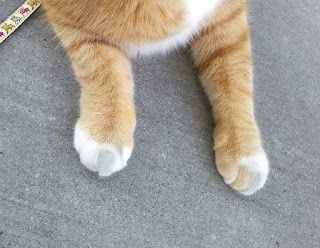