So Far, So Good


Cammie went to the doctor at 10.20 this morning. Usually, Saturday mornings are booked solid at the hospital, but not today, perhaps due to the tremendously cold weather, when everyone sane, and those who don’t have sick cats, are staying indoors. I chose an appointment rather than just a quick injection of Cerenia for Cammie because I wanted her to have a once-over. I am glad I did.

By chance, our preferred doctor was on duty this morning; she knows my cats. She gave my princess the Cerenia she needed but also some fluids, which were also required; they often are, following Cammie’s episodes, as the vomiting dries her out. Everything looked and sounded good otherwise – heart, lungs, teeth – except for her pancreas, the touching of which caused Cammie a little discomfort. The doctor told me that it could be a sign of pancreatitis, but that repetitive vomiting could also cause this discomfort.

Cammie came home and I waited for the Cerenia to take effect (about two hours). After three hours (to be sure), I offered my girl some food, and it was pleasing that she wanted to eat it. (Sometimes in these cases, Cammie won’t feel like eating for as much as a day afterward, perhaps associating food with throwing up.) She has since eaten a second time, and has not brought anything up again. I am feeding her small portions, as I would rather have her hungry than consuming too much so soon after her illness.

Subsequent to these episodes, I never take anything for granted. She could still throw up in the middle of the night. But each minute that ticks by increases the chances of recovery. Also, what she ate hours ago will pass beyond the point of no return, and count as nutrition. I won’t jinx the princess’s chances by writing that she has recovered; I will simply state my hope for such a state.

As for my orange-boy, he is doing adequately. He is eating decent amounts of food, and, significantly, wanting to. He is not drinking enough water, though, and any adulteration of his food with even a small amount leads to its rejection. It is why I wish he were eating paté rather than a shredded variety. But it does have some juice to it, which Parker laps up.

Every hesitation to eat, even if it is just looking up while he chews, makes my breath catch. Is this when he stops eating? No, not yet. My sturdy-boy will stay a while longer.

So today has been a satisfactory one, characterised by guarded optimism. So far, so good. 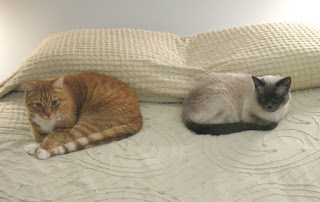