Raleigh is feeling better. I noticed a change as early as Saturday night, when I was playing with the cats. Peachy joined in just a little. That is, he lifted his paw a few times to try to capture the string-toy. It was a start.

Yesterday, I saw that his right eye was surrounded with brown goop, as if an inflammation had burst. I cleaned him up, added more eye-drops and noted that the eye was less swollen and red than it had been. Last night, he was more interested in playing.

This morning, he was impatient for his breakfast, and ate what amounted to three quarters of a 5.5 ounce tin of food. He was also running about a bit, as he does sometimes before a meal. His eye looks better still.

I have two days’ worth of anti-biotic to give him, and I will be giving it to him. I want to pound that infection back to where it came from, so he gets as much medicine as I have. He will also continue to receive the eye-drops.

An interesting aspect is that Raleigh is now crawling back onto my lap, even though I am still putting medicine in his eye. I think, though he dislikes such a treatment, what he really disliked was receiving it in a sore eye. Now, I suspect, it is more an inconvenience than a pain. As well, I have taken to brushing him immediately after he gets his drops, which he enjoys.

Unless he has a serious relapse, he will not be going to the doctor; I had planned to take him today. That would have been enough to set off any number of stress-related difficulties, and I want to keep him as relaxed as possible. While I am loathe to count chickens before they break out of their shells, I think another crisis has been overcome. 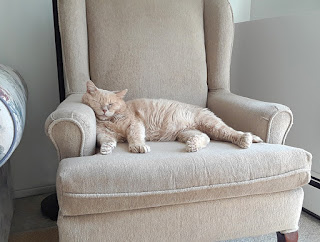