The Cause and Its Effects

As is natural, the introduction of a new cat into a feline household brings changes, even before that cat is integrated into the group; indeed, before the others even meet him. So it is with Jessel.

The two most affected within our home are Tucker and Renn. Tucker is always affected by new cats. I don’t think he has ever recovered from being the lowest on the totem pole. He is constantly determined not to return to that ignominious position. He had an animous against Parker for a long time, one that erupted in an actual brawl. It was only the inclusion of a still newer cat – Raleigh – in the family that mitigated the roly poly’s feelings toward Puck. And Raleigh himself was so inoffensive – and oblivious to any offence others may think he was causing – that he rendered himself harmless. Neville’s advent was not as bad and, in fact, the Nevsky seems to have taken longer to shed his anxiety of Tucker than the other way around. 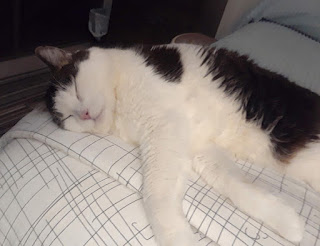 Now, however, comes Jessel, smelling of the outside and, significantly, not neutered. (I thought initially that he was, but was in error.) The unique status of the new fellow has made Tucker’s reaction to him sharper than it had been to others. Tucker has taken to wetting where he shouldn’t. So far, it has been on hard (uncarpetted) surfaces, and a soaker-pad. He even wet right in front of me while I was talking to him. My response is to give him more attention and show him more affection than usual – though since he is often near me, I tend by circumstances to give him more than anyone else, anyway. I don’t doubt that he will recover fully; it will simply take time.

Renn is also adversely changed by Jessel’s arrival. My new foster-cat is currently installed in the library, where he must remain until after some time after his neutering. This won’t happen until a week from Tuesday. (His vaccinations and general examination will take place in a couple of days, but surgery will await the results of any blood- and other tests that are required; also, on an increase in his weight.) In the meantime, Renn is cut off from his preferred spot for being alone, a corner of the library behind a book-case. He has sought out a couple of other locations as substitutes; neither is as good as his original, but I will respect them as if they make him invisible. He is also grumpier toward the other cats. 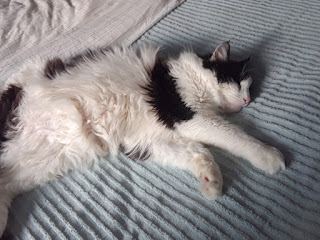 This behaviour is not really in contrast to his generally accepting attitude toward new cats. The latter comes into action when he meets them. The anticipation, and the disruption caused, comprise a different matter. I think they, like Tucker’s problem, will be healed with time. 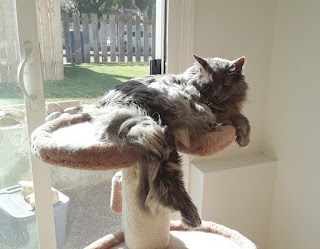 Neville seems interested in meeting Jessel. Nev has waited outside closed doors, behind which the neophyte has resided, on several occasions. Whether this translates into a genuine desire to make an acquaintance is another question, as is whether that acquaintance will be friendly. 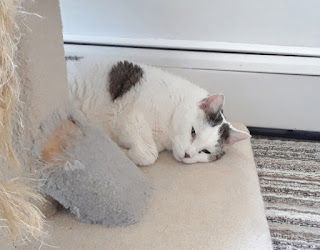 Finally, Josie appears almost unaffected by the alteration in our situation. It may be because she doesn’t move much beyond the bedroom, with occasional forays, when necessary, to the store-room for a litter-box visit. Her food is brought to her in the bedroom, there is always abundant water for her; comfort is assured by different levels of two cat-trees and a comfy bed. My Chubs may also benefit from being my old lady: as I can testify, increased age makes one realise how unimportant much that seemed once to loom large really is. Yet another new beast may fall into that category.

As for the cause of all our distress, such as it is, Jessel knows that there are other cats in the Cosy Apartment, but seems more concerned with moving beyond his confines, though this desire has decreased a little with his switch to the library, and its heights for climbing, its springy rugs and cushioned couch and ottoman, and, above all, its window. How he really feels about having roommates remains to be seen. 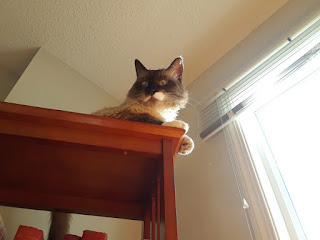