The Pilgrim at Rest 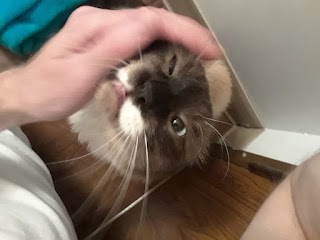 Yesterday, Jessel passed his third night in captivity. He demonstrated then that he is not just partially socialised, but wholly socialised. 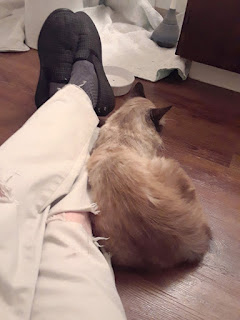 This is a cat who, until Tuesday evening, knew me only marginally, as one of the humans who provided him with food and water. Yet, by Thursday, I was able to pick him up and hold him as I would one of my own cats. By Thursday evening, he was comfortable enough to step onto my lap and fall asleep after some minutes of chin-rubbing. 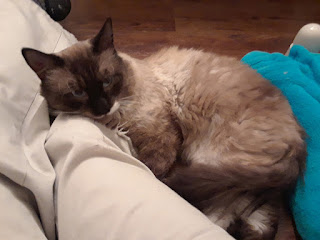 This little fellow is a very trusting cat. Furthermore, I suspect that he loves people, loves being with them. I know by the way that he reacts when I come into his temporary jail-cell – my bathroom – that he likes human company. I have no doubt that he would react well with almost any person who treated him decently and showed him kindness. 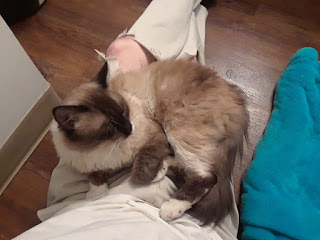 I first observed Jessel exactly three months ago, when he took advantage of the free food offered at Café Cosy. Was he new to the outside then? Had he been wandering for a while prior to that evening? He will be checked for a micro-chip when he goes to the doctor on Tuesday; if one is found, it will perhaps give some insight into his past. 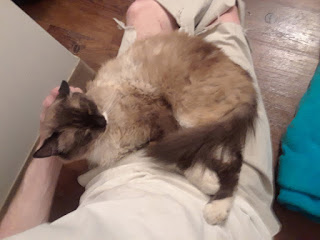 Until then, it is his future that will concern me. And his immediate future will encompass safety and attention, plentiful food, clean water – and more of this. 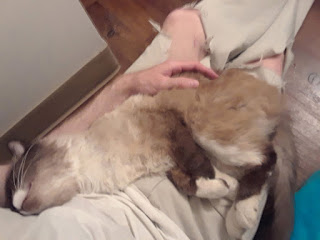