One of the keys to living in an apartment, especially if one used to live in a larger house, is to make the most efficient use of one’s space. I have rationalised my storage of those things I wanted to keep but don’t often use. Closets are packed high and shelves are filled. I have just purchased a small rack of several hooks to hang on the bedroom door so that clothes into which I will be changing may be hung there instead of on the back of a chair. 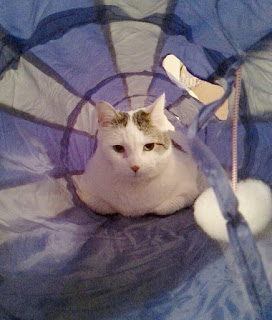 But sometimes efficiency must be sacrificed to enjoyment. And yes, that refers to my efficiency and the cats’ enjoyment. The nylon tunnel has returned. Well, a new one has been brought out. When I bought the previous red-and-grey nylon tunnel, it was a good price and, unsure whether I would find another, I purchased a spare. Moving to the apartment was a good time to exchange them. The red-and-grey nylon tunnel was becoming rather ratty (catty?) with hundreds of punctures and dozens of tears. So after a couple of weeks of becoming accustomed to the new home, the cats received their new, blue-and-yellow nylon tunnel. 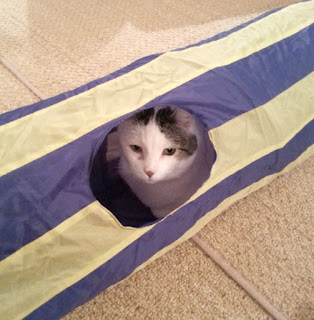 As I expected, it has proved popular. Tucker likes to lie in the tunnel while battling my hands. Renn enjoys rushing through the tunnel and Josie’s favourite activity in it is, well, not an activity; she just lies there. But I think she has fun doing that. Cammie was never a tunnel-cat, though she has used it to sneak up on the others. She may yet again. 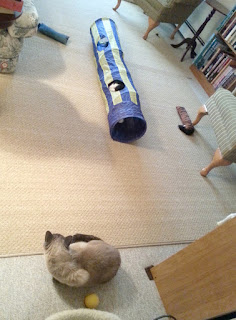 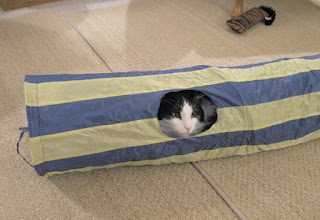 The fact is that the nylon tunnel gives the beasts another toy with which to play, and another space in which to lie. Yes, it takes up room, and I am continually stepping over it, but it is light and cheap; it requires no maintenance, and it is harmless. So I suppose it has its own efficiency. 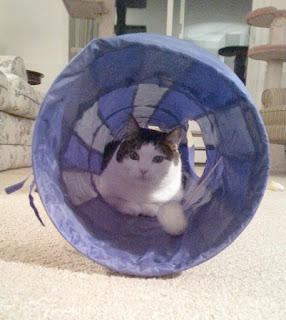 As for the old nylon tunnel, it has, I believe, gone on to provide fun for other felines. In our town, we have ‘big item pick-up’, by which a call to the municipal Waste Management Department (garbage men) may arrange the disposal of large articles that don’t fit or are not allowed in regular trash collections. In preparation for this, I set several items, including the red-and-grey nylon tunnel, behind my house before I moved. But before I could even call for them to be picked up, they disappeared. Among them was the old nylon tunnel. As well, the first cat-tree I possessed vanished. It was Tungsten’s; a simple scratching post with a platform on top. It was becoming very ragged and, with an aging population of pets, I thought a cat-tree without steps was less desirable than others. 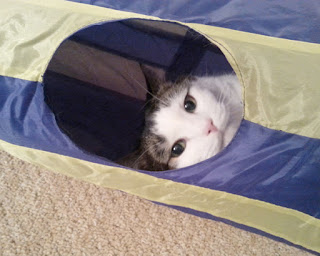 This sort of informal recycling goes on a great deal here. I don’t know if it is the case in other towns, but anything placed in the alleys is fair game, and everyone is glad to have it provide some extra use. I like to think that other cats, who may not otherwise have had a nylon tunnel or a cat-tree, are now using my old ones; there is still plenty of wear left in them. 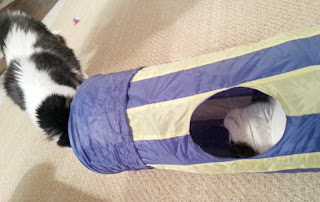 And so my four beasts find themselves in the completed home, with nothing more to be provided. Then again, I find myself wondering what else I can add. Efficiently, of course. 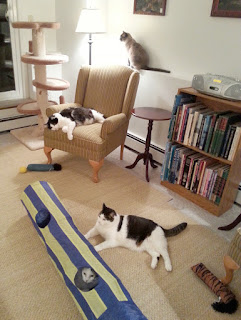