It is not yet noon, and Josie is already out of surgery. The veterinarian called me to report that all went well. The lump has been removed from Josie’s jaw and won’t need to be sent for analysis, after all. The doctor cut into it once it was taken out and it was clearly a cyst. As for my Chubs’s teeth, two ‘pre-molars’ were removed but otherwise she is fine. Not bad for a twelve year old. I will bring her home later today once I finish work.

I have no new pictures of the Great White but I like this hitherto unpublished one from the old house (during the move, in fact). Maybe Josie will feel good enough now to allow the boys to get this close to her again. 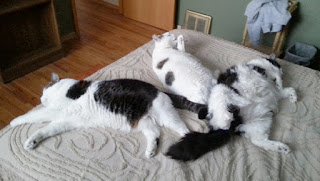