This weekend was Parker’s first foray outside after it had snowed a substantial amount. He had sniffed at snow previously, and had even tried tasting it, I think, but it was in small quantities then. We had a heavy but, fortunately, not long fall of it on Friday, and again on Saturday. 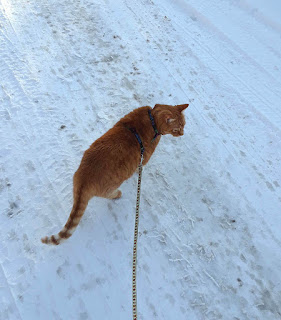 Saturday found the sturdy-boy intrigued by the precipitation. It did not bother him a great deal because the sidewalks were mostly clear, and the streets and alleys had been driven upon, flattening and hardening the snow. 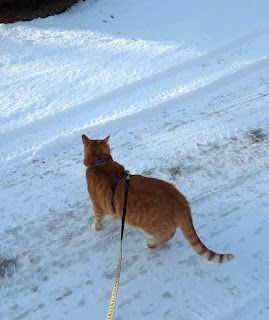 I did notice some intriguing behaviour. Parker saw some cat-tracks in the deeper snow and followed them for a short distance. When he did, he was careful to step inside the already-dinted snow. I thought this might be partly instinctive and partly deliberate: in the wild, such an action would disguise his passage, showing only the first cat’s. As well, if the orange boy disliked walking in the snow, which he seemed to, this would reduce the annoyance caused by sinking his paws into it. 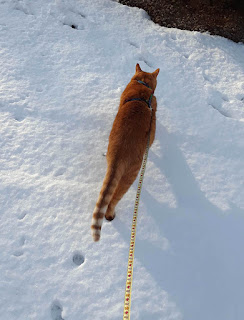 Sunday afternoon, I took Parker for another walk. More snow had descended the evening before, and even the sidewalks were covered. This did not suit my foster-cat at all. He was displeased, and our walk was the shortest yet, except for when I took him out one day – at his insistence – in the rain. This time, Parker initially walked off the sidewalks; he often does that to smell the vegetation. But the vegetation was covered (and dead, anyway), so he reverted to the sidewalks. There was no relief there, however, and he decided to terminate the excursion. 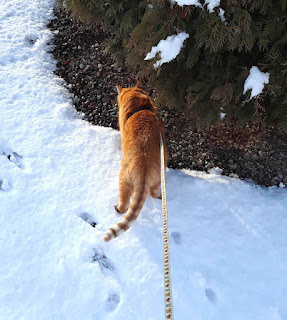 Interestingly, on our way back to the apartment building, Parker made sure to walk in the footprints I had already made. The snow there was flat and hard, and it must have been no worse than walking on damp concrete. He is no fool. 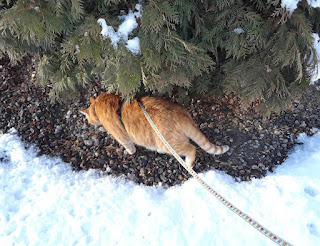 At last, we made it back home. I cleaned off Parker’s paws, which he protested vigorously; immediately afterward, though, he had a mid-day snack and retired to the bed for a snooze. I suspect, while glad to be inside and warm, he then dreamed of warm breezes, fresh grass and a bright, vernal sun.
Posted by John Bellen at 10:45 AM