Tucker is struggling in his recovery from dental surgery. In particular, he has yet to find his new diet. Because he tried to eat his regular hard-food too soon, it hurt him, and he is shy of trying it again. He won’t touch the Orijen. Nor will he eat the Z/D that he formerly liked. (I am not too put out because of the latter; it is not the best food, nutritionally, and I serve it in the cosy apartment only because Cammie’s body seems to tolerate nothing else.) However, Tucker will eat the special diabetic food that previously only Parker consumed; I was surprised at this but am encouraging it. If Tucker is eating hard-food, I would prefer he choose Orijen; but he won’t, and he doesn’t eat enough soft-food. So a full belly of the adequate nutrition beats a nearly empty belly of  the superior.

He is finished taking his medicine. His blood-glucose numbers are high enough for insulin one day, and just too low the next. There will be an adjustment period for his diabetes treatment, I am sure. His body has received a shock, from which it is just now healing. The pain and, probably, toxins, from the bad teeth undoubtedly caused problems, affecting the diabetes. Then, there is his so far erratic menu. For the time being, his medical programme will necessarily be ad hoc. 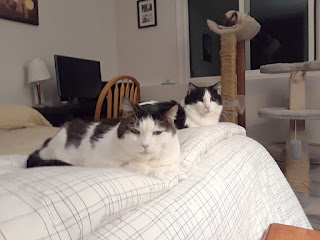 But Tucker is slowly regaining his spirit. This may be seen in his boisterousness when I return each day from work. He is active and cheerful. He is not playing much, but he and I are getting back into our games. Last night he grabbed my fingers while I was attempting to crush his head with my hand. Normally, he then pretends to bite me; this time, he put my fingers to his mouth and gave them a gentle gumming.

I have no doubt I will see my roly poly fully rejuvenated, but it is a fretful path to that destination. I worry about the discomfort and discouragement he will encounter on the journey, but will support him every step of the way. 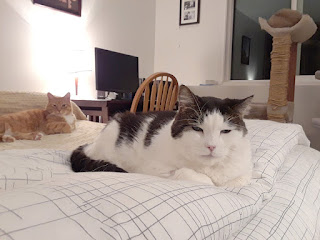