While Raleigh convalesces, the other beasts go on with their lives. My foster-cat, Parker, for instance, continues to enjoy his walks, though those during the weekdays are taking place in increasing darkness. Even so, he looks forward to them. On weeknights, my sturdy-boy isn’t always sure of going out, as it does not happen every day, so his demands are not usually insistent. On the weekends, though, he knows I have more time, and we normally go out in the early afternoon.

It is then that he will press his suit rather strongly. Aside from walking back and forth in front of my computer screen (if I am using that machine), or striding over and rubbing against me, then walking away (if I am reading), or crying at the door (a general purpose device), he has developed another tactic. He will pull down my jacket from its hanger. 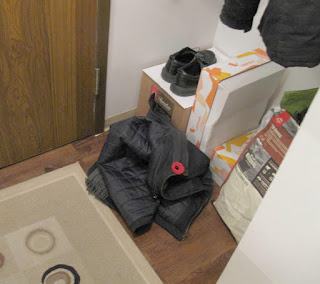 Initially, I thought it was accidental, the result of him playing with the scarf that I habitually store down the jacket’s sleeve. I put the scarf elsewhere, but the displacement of the jacket continued. When it occurred thrice in about ten minutes, at a time when Parker was particularly demanding of an outside adventure, I realised that it was another of his means of making up my mind for me. He knows he shouldn’t be doing it, as well; after the third time, I came out of the bedroom chastising him in no uncertain terms, and he ran into the sitting room, to lie under a cat-tree, as if he had been there all the time.

I had to wait half an hour before agreeing to take him for a walk, just to re-establish my authority. Such as it is... 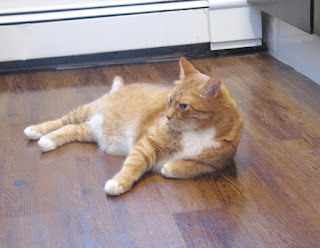