In July, Cammie became sick, having one of her continual-vomiting episodes. The only cause of it that I could determine was a possibly contaminated tin of the Z/D soft-food that she eats. I have been watchful since then for any further tins with unusual textures.

Yesterday, I opened a new tin of Z/D and gave some of its contents to the princess for dinner. She refused to eat. I had warmed her meal and added a little water to it, as she prefers, but she still didn’t want it. The food looked no different than that which she did not hesitate to consume. But, considering her recent illness, I didn’t want to take any chances, and threw out that portion of food; in fact, I disposed of the whole tin. I opened a new one, and Cammie ate without reluctance. By this morning, half the new tin had been finished.

Though I couldn’t discern any difference between the refused food and that that was eaten, there was clearly something about the former that Cammie disliked. It wasn’t a matter of adding more water or warming it or waiting a minute until she had changed her mind. There was a quality in the serving that was unpleasant to her. With her stomach’s extreme sensitivity to ingredients that it finds harmful, I bowed to her judgement. In this case, Cammie knew best. 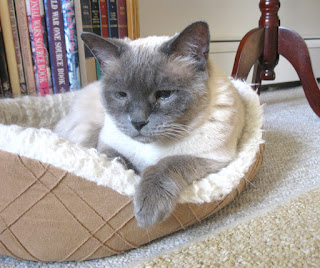