The Fight Over Water Rights

Josie is my oldest cat. For a fifteen year old, she’s doing well. She had all but three of her teeth removed not long ago; aside from the deteriorating teeth, now gone, and the beginnings of kidney disease (due to age), Josie is in good health. She still likes to jump from the bed to the cat-tree by the window and she is eating decently.

My Chubs has, however, started doing something annoying. She has discovered the little water-bowl I keep in the corner of the bedroom for Cammie. I placed it there for the blind princess to have easy access to water when she is lying on her towel in that part of the room. Cammie is spending more time in the sitting room, now that she has gained increased confidence in her sightless navigation of the apartment, but she still often comes into the bedroom for a drink of water. To find Josie already in position at the water-bowl is not only a rude shock for a blind cat, but it also deters her from drinking at all, as she then turns away with growls and hisses, and doesn’t bother to go to another bowl. As Cammie too is at the start of kidney failure (stage one, at this point), she needs water as much as Josie.

The other evening, I had to tell Josie to stay on the bed while Cammie drank her fill at the disputed bowl. She stayed, but she was not happy about it, and stared at me the whole time. I, for my part, had to remain in place to make sure the Great White did the same. It was a battle of wills between two old and cranky creatures, with neither one moving. Only after the princess had drunk what she wanted did I release Josie, who also drank.

It may seem unfair to favour Cammie - I’m sure Josie believes so - but my little Siamese can’t see, so her trek from the sitting room to the farthest water-bowl is long and wearying. She does lap from other bowls, but if she goes all the way to her preferred supply, I don’t want her to be disappointed. Having a drink is much easier for Josie. She of course thinks otherwise.

I made up for my intransigence later with extra attention to my Chubs. But such are the joys of a multi-cat household. 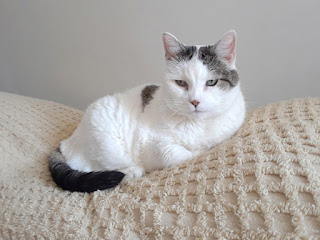