Josie, the Day After

Josie’s surgery was a success, the worrisome lump on her jaw was no more than a cyst, and her mouth is now on the mend. She was brought home about 4.30 yesterday afternoon and was pawing at the carrier door to be let out as soon as she realised she was home; she rushed straight for the food-bowl.

My Chubs couldn’t have the hard-food, though, so she had to wait until I served some softer nutrition. She sucked back a portion, so I gave her a bit more. I didn’t want to give her too much, as she may have been still feeling the effects of the anaesthetic. However, after about forty-five minutes, she was apparently feeling nothing worse than further hunger, so I gave her some more. I continued to give her soft-food in small amounts every hour or so until bed-time. 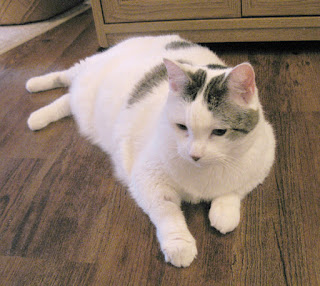 I ran into a problem when trying to give her the anti-biotic, Clavaseptin, that she was required to take. I’m sure that anyone with a cat knows the sort of pill I mean: the sort that the veterinarian asserts may be easily introduced into the animal’s food and eaten without knowledge that it is even there. In fact, it has a taste cats find pleasant!

Who are the cats on whom they test these pills? Have they no taste buds? No noses? 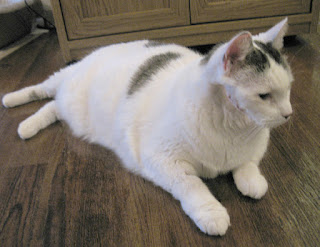 As soon as I brought it to her, Josie recoiled from the food in which I had crushed up the pill. Later, I tried hiding a whole pill, thinking the fragmentation of the pill released a great smell. Both times, Josie refused to come near the food, though she was clearly famished. I had to resort to crushing up some Temptation Treats and including them in her meal. This had the desired effect, though it took constant encouragement on my part to achieve an empty dish. Fortunately, the pills need be given only twice a day. At other times, my Chubs is eager enough to eat.

She also needs to receive two doses of Metacam pain-killer, though this is delivered by syringe directly into her mouth, once this morning and again tomorrow. I was able to accomplish this with little trouble, though I had to be careful of her sore mouth. 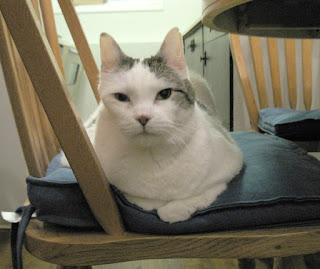 The principal symptom of Josie’s return was a restlessness. She wouldn’t stay put for long last night, though this may have been accentuated by hunger. This morning when I left for work, she was lying comfortably on the heated towels in the library, and purred loudly when I spent a few minutes petting her. She may have been in pain earlier, and the Metacam later took effect.

Though it may not be seen well from the photographs (I didn't want to show it too much), the cut made to remove the cyst is rather large and ugly. Much of her face’s right side had to be shaved, making her head look even smaller than it does ordinarily. Her head must be the size of a walnut under the fur. Otherwise, she looks good. 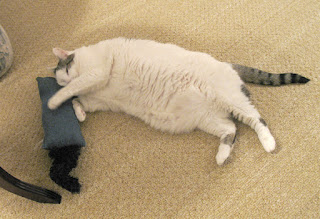 I will call the doctor shortly and find out when Josie may eat hard-food. I can’t have a bowl of it out while I am not there, of course, and even when I am, the newly-discharged patient tries everything to get to it. Meanwhile, the other beasts go without; when I put the bowl out for them, they find the glare of a large-bodied, tiny-headed cat with a scar on her face somewhat intimidating.

Like the disruption during the move to the new apartment, however, this extraordinary situation will pass soon, and things will return to normal. Already last night, she slept at least some hours on the bed, as she usually does.

I want to thank everyone who expressed concern about the Great White, and satisfaction at the successful outcome of her ordeal. It added tremendously to the good feelings resulting from her renewed health. 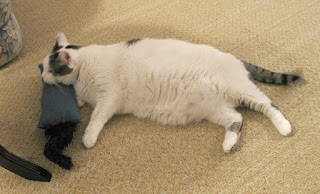