Another Visit with Adah

I was able to become re-acquainted with Adah last Saturday. She is the kitten I found on the day of her birth. Her mother, we believe, was too young to understand how to take care of her and her two siblings, who died the next day. Adah survived. She was taken in by the rescue group of which I am part, the Lethbridge PAW Society, and given to a surrogate cat-mom to nurse. Adah thrived. You can read about her beginnings on my blog entries from April, 2018. 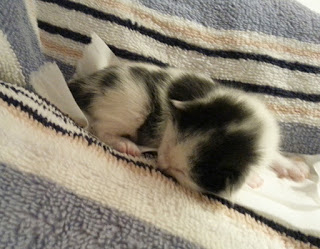 The second Saturday of every month, PAW brings a cat or two to the downtown Homes Alive pet-supply shop in Lethbridge, to show them off, hoping to generate interest in their adoption and awareness of rescuing cats in general. Last Saturday, Adah and her foster-brother and best friend, Tucker (not to be confused with my roly poly) were brought in. 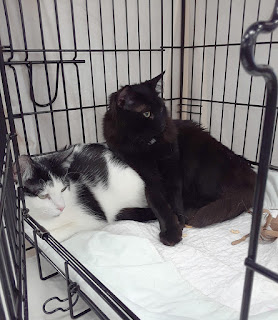 Adah did well, though she clearly preferred to be elsewhere. She was unnerved at first but calmed down later. Tucker, all black but for a tuft of white on his chest, and at least half again as large as Adah, was more outgoing, and was a comfort to his foster-sister. They charmed everyone who saw them; they are both people-cats, and love being with humans, especially attentive ones. They are going on eleven months of age - Tucker being ten days the elder - though Adah, while facially mature, is still petite, and likely always will be. 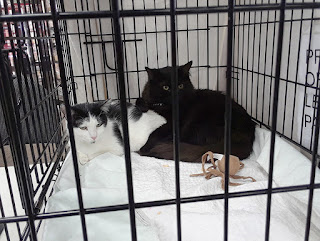 They get along with other cats and with dogs, though one, for some reason, raised Adah’s ire. Pets are allowed to visit Homes Alive with their people, so long as they are on leashes (the pets, not the people). One dog who came in was a big fellow, a mastiff, I think. He was very friendly, ambling about, his tail wagging, happy to make new friends. Well, Adah was not happy to be one of them. Though the dog didn’t approach to within a yard of Adah’s cage, the little cat suddenly began growling and hissing, then charged the dog - though of course she couldn’t leave her confines. Her hackles were literally raised, and stayed raised for about ten minutes, while she growled at everything in general.

This would be no bar to Adah living with dogs. She would grow accustomed to a canine roommate in no time, and a cat would be a pal for her; it’d be nice if she and Tucker could be adopted together, but it’s not necessary.

I’m surprised she has not been adopted by now - but then I’m surprised that every cat is not adopted. Adah loves people, is friendly, fun and perfect for a home with or without other cats. Perhaps the next time I see her, it will be as she is heading to her permanent home. 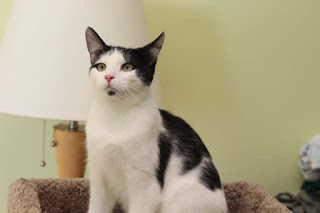