How Mr Parker Is Now

I’d like to thank all those who read my last two blogs, and those who made such complimentary remarks upon them. The story of ‘Mr Parker’ includes some of the things that I have learned from my cats over the years, and implies, I hope, how I feel about them.

I want to apologise for frightening some readers initially for giving the impression that Puck had died. I will correct that misapprehension now in detail. Parker is doing adequately in general, and very well in view of the tumour inside him.

He continues to eat, quite heartily at times, which I take as an indication of his condition. This gauge is not accurate, I know: there are many aspects of his cancer that are unmeasured by appetite. In fact, every time I come home from work, or wake up in the morning, every time I see him dozing so still that he seems not to be breathing, I worry that his time has come when I haven’t been looking. Even so, I think his consumption of food is as good a measure as may be had without a doctor’s appointment. Parker has been eating one very good meal each day - at least half a large tin of soft-food - with much smaller portions at other times, though often he will eat nothing after he’s had his day’s big meal. I also tempt him successfully with certain hard-food and treats. 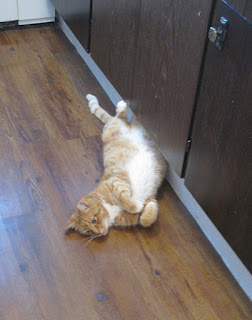 Parker still enjoys a good petting and head-rubbing session, though this depends on his mood. Sometimes he wants to be alone. He continues to take an interest in the outside world, especially now that spring has come and the warmer temperatures mean the windows can be opened a bit. 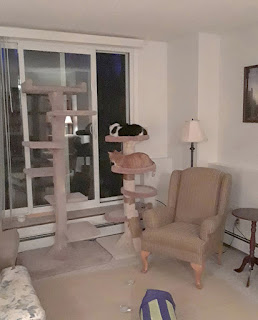 Last Saturday was very pleasant outside, and the orange-boy went for his second walk of the year. This one was enjoyed much more than the first. Parker didn’t stop purring the whole time and, at one point, rolled on the sidewalk, his forefeet kneading the air. He seemed to tire easily, however, and kept sitting or lying down after a while. I don’t think he had the energy to walk back home without a long rest, so I picked him up and carried him. He lie quietly on the kitchen floor afterward, resting and purring. 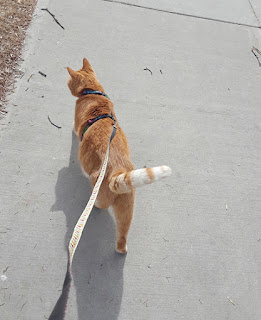 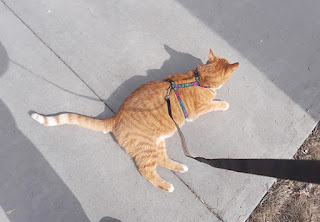 His predilection for lying in odd spots has increased. I have found him not only on the kitchen counters, but on the stove-top. I am not afraid of him jumping up while a burner is on, for I am always present while the burners are in use and they cool rapidly; I am always in a position to block any attempt that might land Parker on a hot or even warm element. What does worry me is that he could accidentally turn a knob and then fall asleep on the stove-top, and thus be oblivious to danger. 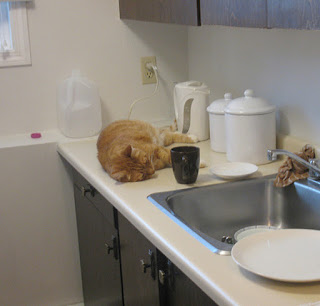 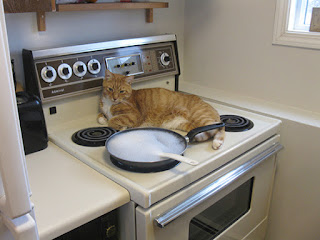 I would much prefer him to take his ease in the library. There is no danger from reading too much.

Next week, it will be two months since the sturdy-boy was given weeks to live. Though internally, he may be worsening, and I see evidence of his illness, there is no direct proof that his life is diminishing. Every day that Parker is with me is a good day for us, and if each week is one week closer to his departure, it is also a week that we have spent together, my orange-boy and me. 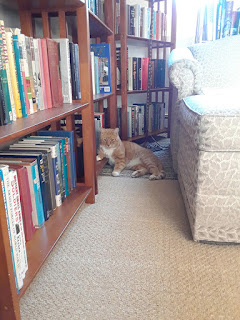