Cammie experienced another of her vomiting episodes this week. I was not going to write about it, as they tend to follow the same pattern. I still worry every time they occur, of course, as I think that some day, she won’t recover, but the routine is that she begins vomiting, emptying her stomach; she continues to throw up until I take her to the veterinary hospital for an injection of Cerenia. This time, however, there were differences.

The Cerenia, received on Tuesday, did not have its desired effect as swiftly or as decisively as it has in the past. I brought Cammie home from the hospital and locked her in the bathroom with all the necessities, as it would be easier to determine later if she ate or vomited during her incarceration, spent while I was at work in the afternoon. When I came home, she had thrown up once, had not eaten nor used the litter-box (the last was hardly surprising as she likely had nothing to leave there.) She puked up a little pink bile afterward, too.

I was much concerned by this, and made an appointment for today to get her another injection of Cerenia. In the meantime, though, I thought I would try a little antacid, followed by some food-and-water mix, delivered by syringe. I figured that it could not hurt, the worst being that she would bring it back up. I was initially going to use Recovery as the food, to restore some of the nutrients she had lost. But then I thought I would use the soft version of her Z/D allergy-sensitive food. That might pass more unnoticed by her allergy than Recovery.

Whether it was the antacid, or that the Cerenia was at last working, I don’t know, but Cammie did not throw up the contents of the syringe. Encouraged by this, I later offered her some Z/D hard-food, which she ate. At snack-time (about eight o’clock), when the beasts receive some tinned edibles, I thought of suggesting to my princess that she try some of the Z/D soft-food on a dish. She ate it. 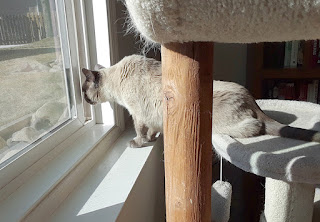 My surprise was great. Z/D in kernel form is, apparently, tasty, to judge by how my other cats want it. The same variety in soft-food has the consistency and feel of rubber and, so my cats have decided, a similar flavour. None of my beasts has ever liked it. Furthermore, no other cat of my acquaintance has eaten it; even hungry outsider-cats have disdained it.

But Cammie was starving. Moreover, this was the first time in years that I was offering her soft-food, since before she started her on the food-sensitive diet. I fed her only a small amount last night, as I wanted to make sure it stayed down before giving her larger portions. Cammie did not vomit during the night. This morning, for breakfast, she enjoyed - and I think she really did - the first soft-food breakfast she’d had in recent memory. She finished nearly half a tin of the disreputable rubber-like food.

It may not stay down, of course, though I believe she is over the worst of this, her most recent, episode. This was the first difference of which I wrote.

How Cammie will spend her days when I am absent for long periods is a second difference. I will be locking her in the library, with food, water and a litter-box. This will allow her to eat as much, or little, of her specialized food, while keeping her away from the more ordinary hard-food the other cats eat, and that food may now be left out for any of them to graze during the day. Hopefully, that will add some weight to the diminishing figures they seem to have. As well, I would like this sequestration to reduce a bit of the tension in the apartment, as Cammie has been quite ferocious in her non-violent but nonetheless intimidating behaviour toward Raleigh. When I am home, or when I leave for shorter periods than my work-day, and the regular food-bowl is not available, Cammie will be free.

Locking my little Siamese away for much of each day may seem extreme, but it’s the best way to avoid any more episodes which, I am afraid, may worsen to the point of not being cured. Also, she is probably the least to mind being isolated from the other cats. She will have light and a view, and fresh air, now that I can open the windows slightly to the warming air of spring. There is a comfortable couch, and plenty of books for her to read, if she feels so inclined.

Two things I noticed about Cammie during this adventure. One concerns her mouth. I observed for the first time that only one in every two or three kernels that she picks up doesn’t fall out again. As well, when she crunches up the kernels many crumbs are left behind. I am certain this latter is a new development, and pretty sure the former is, too. When calling the veterinary hospital to cancel her Cerenia shot this morning, I asked about any notations made on the princess’s record regarding her mouth or teeth, either this week or last month, when she was previously examined. Stage two gingivitis had been observed, but, while that will mean a dental cleaning in a few months, perhaps, it should not signify pain or discomfort now. Further watching is needed on my part.

Secondly, I noticed once more how forgiving my friend is. After I shoved a small piece of antacid into her mouth, followed by water and, twenty minutes later, a syringe full of food-and-water, she was happy to climb onto my lap while I sat with her in the bathroom (waiting for her stomach’s reaction) and purr. Later, during the night, she spent most of the dark hours on my neck, her motor racing. I made sure she knew I was aware of her, so I stroked her very soft fur, at least until I fell asleep. I can sleep with a cat on my neck and head now.

I will know when I go home this afternoon whether this latest ordeal of Cammie’s is over, and we can establish a new and more successful routine for her diet. Whatever the case, I suspect my princess will, however annoyed or angry she may become, consent to ignore my follies and purr for me once again. 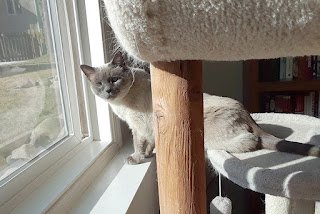