The Case of the Smelly Deposit

“Good day, Constable. How may I help you?”

“A complaint? Good Heavens! About me?”

“Perhaps, sir. We’ve received a complaint about the excessively strong smell of poop in the Cosy Apartment.”

“No sir. We believe it emanated from one of your cats. May I come in?”

“Certainly, Constable. Who made the complain, may I ask?”

“I should qualify, sir, that it was not a complaint as you may term it; we call all such reports to us complaints.”

“Just so, sir. It came from your resident manager.”

“It didn’t emanate from him?”

“The resident manager, you say?”

“Yes sir. He was in your kitchen with the plumber, repairing the clog in your sink, when there arose a very strong odour.”

“Not from the sink?”

“No sir, from the store-room where the litter-boxes are kept. Someone had taken a crap, the smell of which was of epic proportions.”

“Put that way, I would have complained myself.”

“Very understanding of you, sir. The smell was so noxious that the manager was constrained to scoop the litter-box himself, just so the plumber would not be overcome and pass out.”

“Since a plumber may be used to noxious fumes, may I assume this to be hyperbole?”

“You may, sir. But the manager did have to scoop the litter-box for his and the plumber’s olfactory safety.”

“Thus arose not only the smell but the complaint.”

“Just so, sir. I should point out that the manager was not really offended. Indeed, he seemed to find the episode amusing.”

“Well, he is a cat-person himself, and very compassionate toward our feline friends.”

“Yes sir. The plumber’s opinion on the matter is, alas, unknown.”

“That’s probably just as well. If there is no complaint, as such, why are you here, Constable?”

“Well, sir, each complaint, even if they are mere observations, must be investigated. May I meet your cats, sir?”

“Of course. This is my oldest, Josefina von Chubs.” 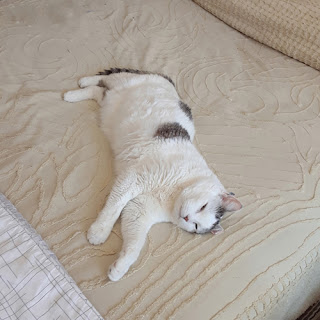 “That’s one way of putting it. Josie, there’s been a complaint. Josie. JOSIE! There’s been complaint!”

“Someone left a very smelly load of poop in the litter-box the other day!”

“Otter Day? Do you mean Ground-hog Day? You missed it, you know.”

“Perhaps we could move on, sir?

“Er, yes, all right. This is Renfrew Foster. He generally goes by ‘Renn’.” 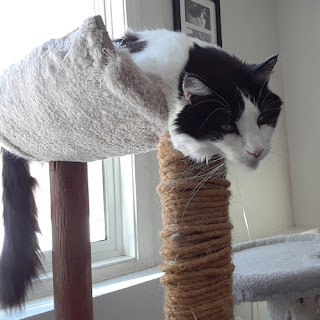 “And mace? Do you have mace? I’d like to have one of them, swinging that around, the big ball on a chain… Do you have one?”

“Uh, Renn, the constable is investigating a big, stinky poop in the litter-box.”

“Oh. Well, it can’t be mine. I mean, mine are big, sure, and they stink, but only for a bit, then they stop. I have very considerate poop.”

“That’s true, Constable. His poop is quite, er, considerate.”

“Considerate poop. Yes sir. Not that this is connected to our investigation, sir - not at all -  but have you thought about counselling, sir?”

“I have six cats in a cosy apartment, Constable. I’m beyond counselling.”

“This is Tucker R Poly.” 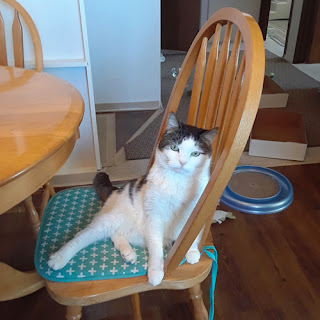 “I haf no mancat bits, eever.”

“Yes sir. I understand you have royalty staying with you, sir.” 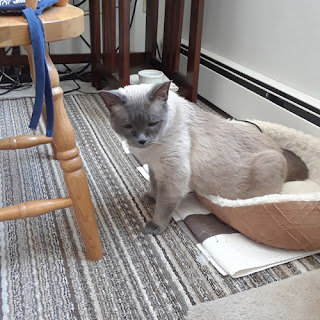 “I’ll attend to her in her chamber, if that’s acceptable, sir.”

“Very proper of you, Constable. Thank you.”

“Your Serene Highness, we are investigating a matter of smelly poop.”

“And you think I can point out the culprit to you? I am sure I can. I am blind, but my sense of smell is superb.”

“We were thinking of—”

“I hope you won’t suggest that I am to blame, Constable. I have poop that practically floats on the breeze.”

“Well, in a manner of speaking, Cammie, that’s true…”

“You see? The other human agrees with me. My poop is of a nature as sweet as I am.”

“I can attest to that, Constable…”

“All right. We’ll, uh, leave you for now, Your Highness.”

“You have leave to depart.”

“And this peach-coloured one here?” 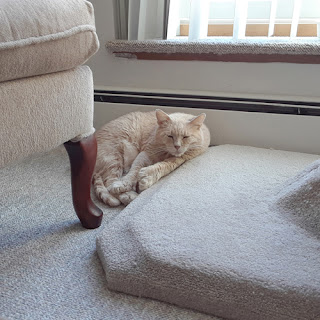 “You are a good boy, Raleigh.”

“And finally, this fellow.”

“This is Neville Nevsky. He’s new.” 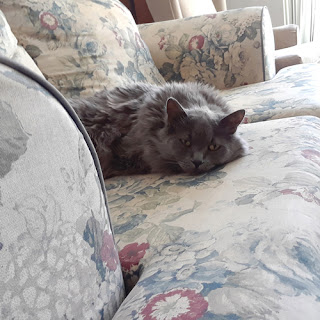 “Well, he’s filled out quite a bit since he’s been here. His fur is now much longer and luxuriant. He looks a completely different cat than he did when he came.”

“Changing his appearance, is he, sir?”

“I haven’t really gone into that with him…”

“Rushes out of the box afterward, trying to get away from what he produces?”

“I don’t think that’s the reason…”

“Thank you, sir. I believe I have all I came for.”

“Do you recall the four bars of the famous Dragnet theme, sir?” 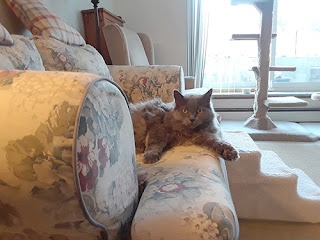 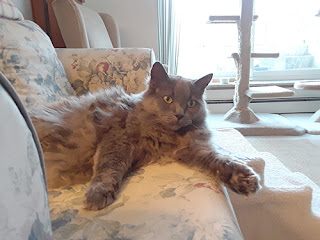 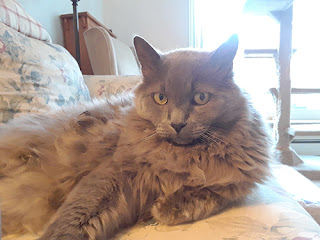