Two for the Hospital

Renn and Tucker visited the doctor this morning. I had called yesterday to try to append Renn on to Tucker’s appointment and was told initially that there wouldn’t be time. When I called back to make an appointment for my big boy, I was informed that I would indeed be able to bring him with the roly poly but, when I arrived, it turned out that there had been a misunderstanding – not on my part, as I had made sure of my comprehension in the case – and there would not be time for Renn. However, my usual veterinary arranged it so that she could examine Renn anyway. My cats’ hospital staff try to be accommodating that way. 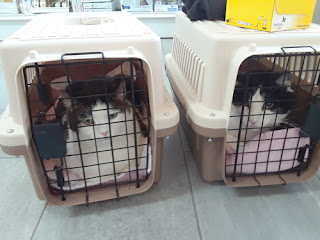 Firstly, I will state that the report on Tucker will be given tomorrow. It is pretty interesting and, so far, things are progressing well with the experiment of which he is the subject.

In the meantime, Renn is still struggling with his cold and cough. As is always the case, he improved considerably the day of his medical appointment. The doctor checked his heart and lungs – the former strong, the latter clear – but based on my description felt that Renn was suffering a recurring viral infection. Anti-biotics would do nothing against that, of course, but Lysine was prescribed to inhibit the viral cycle. I will be attempting to give my big boy that substance later today. 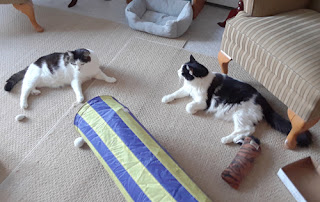 The doctor heard Renn coughing and was a little concerned about asthma. She stated that a symptom of it could be frequent coughing in such a manner. Renn has been doing just that, so I will keep my ear on the frequency of it, and report back to the doctor. She said that only an x-ray would confirm asthma.

For now, though, Renn is in good condition, with some medicine to help him get over the repetition of his cold. I am not worried that it could, at this point, worsen into pneumonia or something equally dangerous. But I will keep vigilant. 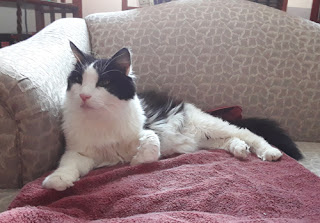