Under the Weather Again

Renn is the cat in my household who is the least affected by ill health. This year has, though, been an exception to his norm. The second week of January saw him fighting a cold, the most noticeable effects of which were sneezes. He seemed to get better not long afterward.

Now, however, the cold has returned, and seems much stronger than it was. Last night, I noticed that my big boy was having trouble breathing at times, as if through a clogged nose. He had been eating acceptably until yesterday, when he refused all soft-food. That is not too worrisome, for he does that on the best of days. But it is an added worry with his cold. I hope to see him eating from the hard-food bowl, at least.

I had wanted to take him to the veterinary with Tucker tomorrow, but they have no opening. I don’t want to leave this long, but it may have to wait until Friday. But if the situation doesn’t improve on its own, I would rather be safe than sorry. 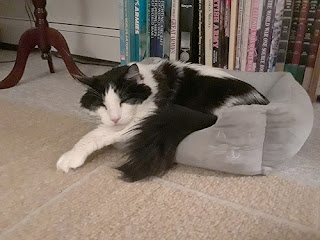