Tucker has long had health problems. Each has been defeated or, at the least, beaten into a stalemate. The continual trouble has been his diabetes. For quite a while, it was under control, his numbers representing a satisfactory armistice in the war, rather than a victory. Lately, however, they have been erratic and, while the roly poly has not exhibited any overt signs of diabetic advancement, they are symptomatic of a disappointing turn in the fight. This may be due to a new development, the onset of kidney failure. Whether or not this is complicating his diabetes, and the struggle against it, the fact remains his blood-sugar levels are unstable.

In an effort to understand them better, a new weapon is being prepared. This coming Thursday, Tucker will be taken to the veterinary hospital where a new sensor will be applied to his body. A patch of his fur, between the shoulder blades, will be shaved off, and a very thin needle inserted into the skin, and glued in place. This needle is actually a glucometer of sorts, and will record continual readings of my cat’s blood-sugar levels, taken every fifteen minutes. I will have a device, rented from a pharmacy, that will allow me to read the numbers; I need only pass the device over the needle. This must be done at least four times a day to keep everything active. 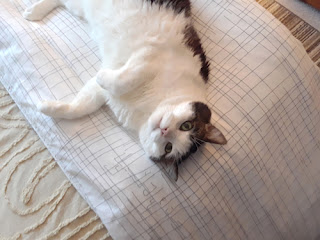 This device in itself will do nothing to control Tucker’s diabetes, of course. But it will give a much greater series of readings than would even a conscientiously performed ‘curve’, which usually samples the blood-sugar every two hours, hourly at the day’s most critical period. Furthermore, the numbers will be recorded over several days, giving a comprehensive record.

The machine is something new to our veterinary hospital, though a doctor, recently hired there, is familiar with it. Tucker will be the first of its patients to be fitted with it. It stays in until it falls off of its own accord; when and where it does that cannot be predicted, and so will require some vigilance on my part. I don’t know how Tucker will react to the implanting of the needle which, to other cats who have been so fitted, gives almost no clue to its presence. Much will depend upon Tucker’s attitude to the whole thing, so I hope my little sausage-cat will coöperate. If he does not, it won’t be his fault; having an implant, however slender, between his shoulder blades will not be the most natural experience he could have.

I will write about the events when they occur on Thursday, providing more details on this device, its workings and its effect on my much prodded little guinea pig. 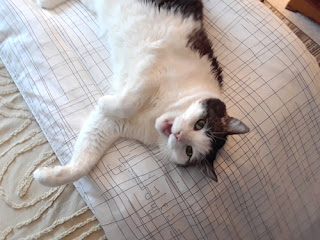