The little Felons are enjoying the relative freedom of the bedroom. They run and climb and discover new things all the time. They aren’t always sure of their surroundings, or of their capabilities. This uncertainty is usually combined, ironically, with a complete absence of consideration of the effects of their own actions in the same surroundings.

A couple of nights ago, Oleo leaped off the edge of the bed to the floor, a descent of about two and a half feet. I suspect, landing on carpet, he would not have injured himself. Unfortunately, his little head encountered a chair leg about four fifths of the way down. He seemed unfazed and ran off to wrestle with his brother. This was later followed by Bisto also wanting to get off the bed. He, however, has figured out the stairs on the near side. He has not figured out that they remain stationary. He ran toward them, and missed by an inch or two. I heard a scrabbling noise, saw a flurry of stubby limbs and then a slight thump. He too was unhurt. 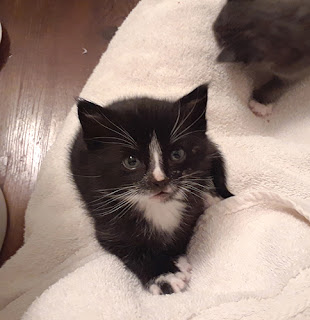 The Felons like my legs. They climb on them, jump on them, lie on them and fight around them. My legs now look as if they were in front of a glass-paned window blown out by a bomb. Oleo and Bisto can now climb to my knees; the former is especially good at such mountaineering. 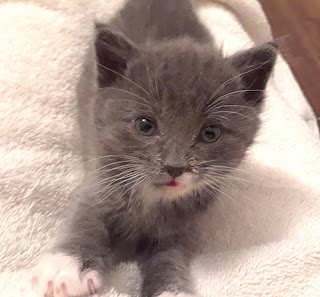 But eventually, they tire and must rest, sometimes with little transition between action and stillness. They found the heated cat bed in the bedroom (though they weigh so little (about half a kilogram - one pound - each) that they may not depress the cushion enough to feel the warmth. That didn’t matter, though. Even the most hardened of criminals must sleep eventually… 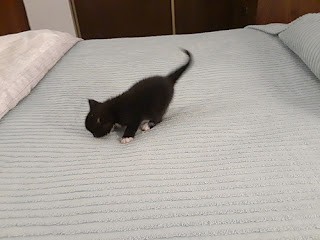 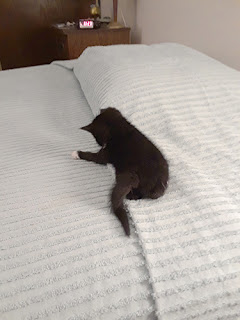 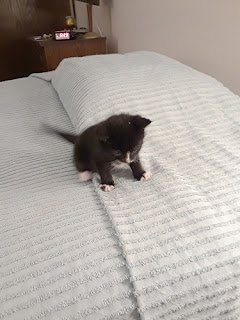 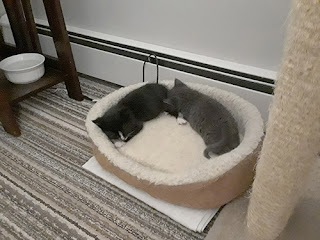