Neville went to his doctor’s appointment yesterday, and returned with some good news. 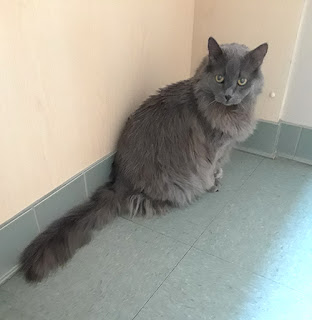 I was worried that his eyes were looking somewhat jaundiced - it’s hard to tell with a cat whose eye-colour is naturally a golden green - but the veterinary thought that there was nothing amiss. More tests were run on his blood and, this time, on his urine, and the numbers that were somewhat alarming last week have been replaced by more satisfactory amounts. Whatever ailed him was probably defeated by the medicine with which he was plied. There is still reason to keep vigilant - the Nevsky is a diabetic, after all, and so his body’s equilibrium can be easily thrown off - but my foster-boy is in good condition.

Nev will continue to receive sub-cutaneous fluids, which he takes with equanimity, and the remainder of the antibiotics. The latter, due to one that is particularly vile-tasting, is more of a trial for the poor fellow than being poked by fluid- and insulin-needles. He is eating adequately; certainly not as much as I would like, but well within the limits required to keep his organs busy. He seems to have increased his fondness for Z/D hard-food. It’s not the best nutrition, but it has kept several of my cats going when they accepted - or could accept - nothing else.

Another crisis has been averted or, more likely, beaten down. Though it was an expensive few days, there is an advantage in that Neville is now familiar to the rescue-group’s doctor. Previously, being associated with another group, he had been to a few veterinaries, none of whom we knew. This will be important in giving him more consolidated care at a familiar hospital. I am pleased with the outcome and, despite the last horrid bits of medicine he must endure, I think Neville is, too.