When the Café Isn't Cosy

This weekend, November decided that anything January could do, it could do better. We had a blizzard. It started off innocently enough on Saturday, with huge snowflakes, the kind that decorate Christmas cards. 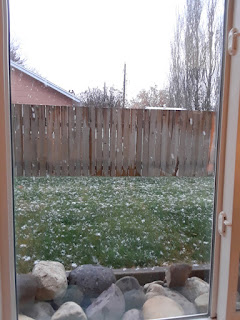 Soon, though, the precipitation came down faster and, if in smaller flakes, in greater amounts. The wind starting rising. The temperature at this point was not low. Indeed, while the snow accumulated, it was slushy. 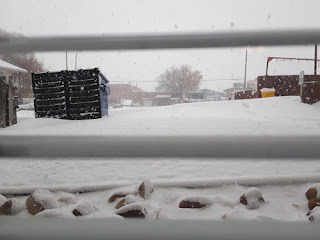 By nightfall, which comes early now, it had turned cold, and the wind was enough to take one’s breath away. I didn’t expect any outsider-cat to come to visit. Sable came for a late supper every night of the cold period we had a couple of weeks ago, but she doesn’t venture out when the snow is falling heavy and hard, and I hadn’t seen any other visitor except a raccoon in that time.

The blizzard continued today. The little shelter in which I place the outsiders’ food-bowl was filled in with snow, and the heated water-bowl was frozen over, due to snow falling on the water and turning the surface too cold for the heat to keep it liquid. I ventured out in the evening and cleared away the snow, and freed the water.

I wasn’t going to bother replacing the food-bowl. I thought no one would come out on a night like this. But I also thought that, if someone did, they might walk a long way through icy winds and deep snow for their only meal that day, and would find nothing. So I turned the shelter to give it an advantage against the wintry blasts, and poured more water in the heated bowl, as depth gives some defence against freezing.

Less than an hour later, I saw this. It was easier for me to observe Café Cosy’s unexpected customer – the café not being so cosy just then – than to photograph him, especially with the lights on inside. But he was there. 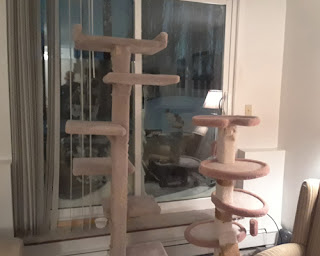 I call him Arliss. He is white and orange, and a very infrequent patron of the café. He has come a few times simultaneously with Sable, though I don’t know if they are friends or if their arrivals are merely coincidental. He is extremely timid and, when he noticed me watching him, ran away from the food-bowl, where he had been eating. 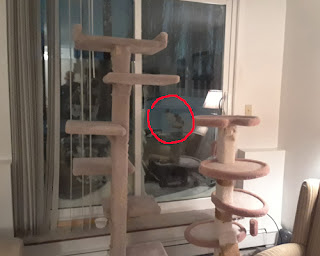 He disappeared a moment later. But I have already re-charged the food- and water-bowls, and will make sure they are free of snow before I go to bed. Arliss may not have had his fill with my interruption, so I want him to find as much as he wants if he returns. I don’t know where he lives or how he survives, but if he came out on a night like this, he probably needed food. I want him to be confident of a meal at Café Cosy, even in the least cosiest of weather.