The Felons continue to learn, grow and change. Their eyes turned green this week, suggesting that they are probably about seven weeks old, one week older than we in the rescue-group thought. We’ve now re-set their birthday to September 25th.

Oleo and Bisto have also learned to climb the cat-trees in the bedroom. This is somewhat to the consternation of Josie, who liked to keep out of their way by lying on one of the platforms off the floor. She can still escape the kittens by resorting to the saddle at the top of the taller tree. 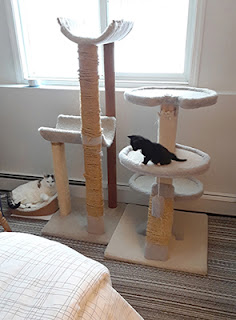 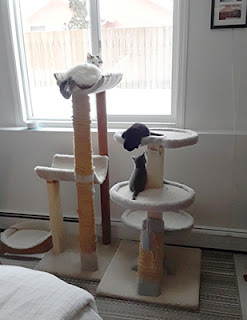 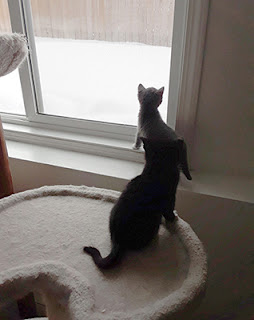 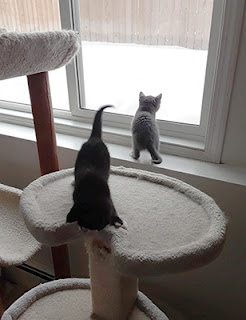 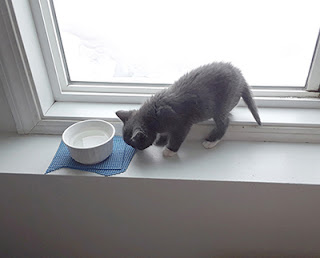 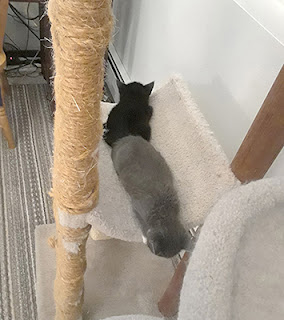 But, in fact, my old lady does not do that as often as I thought she might. Even with the energetic pair flying about the carpet, Josie will lie in the heated cat-bed on the floor. The Felons will sometimes cautiously approach her, sniffing. My Chubs will usually tolerate this, sometimes sniffing in return. If the youngsters come too close, Josie will give them a warning; if they ignore it, she will whap them, though even that blow rarely connects. The Felons get the idea: you don’t mess with a guard five times your size. Mostly, the Great White ignores them. 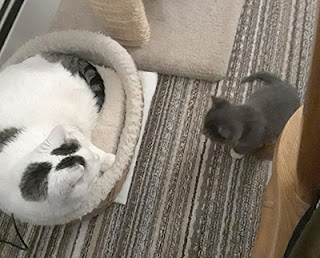 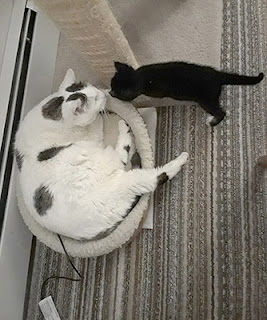 Of the others, Nevile dislikes the kittens, growling and huffing at them, if he finds himself close to them. Tucker will tell pretty much everyone that he is displeased with the little ones, grumbling and mumbling to himself. When the roly poly is annoyed at something, he is annoyed at everything. Renn, on the other hand, though he doesn’t care for the newcomers, shows some promise. I will work on him.

In the meantime, Oleo and Bisto continue to fight each other, in between snoozing cuddled up. They love their games together, and are a perfect lesson for anyone wondering if two kittens are preferable to one. Alone all day, they are company for one another; I’m sure they spend half their time wrestling and chasing each other. Neither bullies, and they take in turns being the attacker and defender in their fun. One will look for the other, if he can’t see him, and come to discover what the other finds so interesting. Together, they are learning how to be cats. Perhaps, maybe, possibly, one or two of mine will help show them. 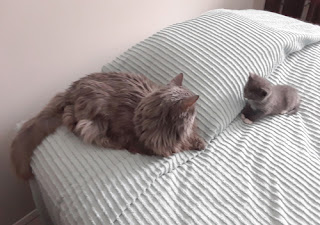