To be honest, he may be Philo, but Rebus’s name provides alliteration.

In any case, I was able to re-trap one of the black kittens this morning. I’m sure he’s kicking himself for falling for the same trick twice, but the temperature dropped to -12° (-4° F) last night, so if he can be tamed, it will be the last frigid night Rebus will have to suffer.

There are still Philo and Rhombus to re-capture. The latter I have not seen since I released him subsequent to his neutering, but I will plan for his trapping, too. In the meantime, I will hope my luck holds. If I am lucky, then the remaining pair of kittens will be, as well. 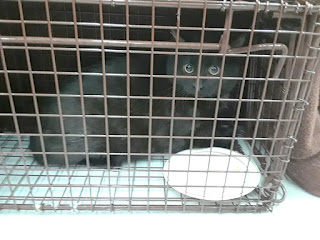