Tucker is developing a bald patch on his back. I am certain it is not caused by excessive grooming on his part; I’ve never seen him licking the spot and, indeed, I don’t think he can reach it. It has appeared very recently and, from my perspective, suddenly, though this may be simply because it has at last lost enough hair to be noticeable. 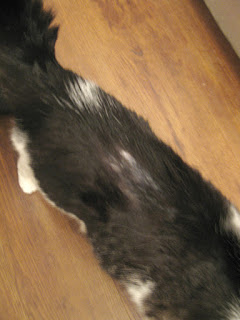 Whatever the case, it is a bit of a concern for me, especially coupled with the fact that the roly poly is becoming less rolier and less polier; in other words, I believe he is still losing weight. This second characteristic may send him to the doctor in the next week or so.

Tucker is otherwise fine, so far as I can determine. He is still as good-natured as always, and never seems to be in discomfort. I recently conducted a ‘curve’ to study his blood-glucose numbers, and they came back, if not impressive, then normal for him. His appetite remains sparse, though this has been a fact for years.

All this means that I will watch his condition closely, and decide whether to take him for an examination soon. The trouble with that is, as many cat-owners know, there is only so much that a doctor can discover at certain times and with certain symptoms. Nonetheless, a consultation may be in order. 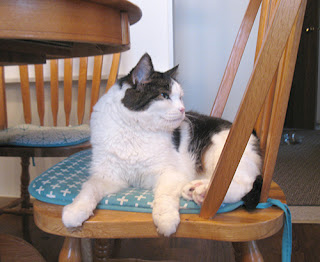